UPDATE to the Update!

I Did Have to Stop Selling physical products to Colorado customers only because This is True is actually in Colorado. Jump to the Update or read on.

As you might remember, the U.S. Supreme Court decided in June that each state can now require sales tax to be collected on Internet sales of tangible goods — that even if a retailer doesn’t have “nexus” in a state, the state can require them to collect sales tax since “significant” sales creates that nexus. The “nexus” idea was the point of a 1992 decision that essentially exempted out-of-state online retailers from collecting taxes where the had no presence. “Significant” (according to the ruling) seems to be $100,000 worth of sales to any particular state, or 200 or more sales.

With the new ruling, Colorado will soon require online retailers to collect sales tax according to the recipient’s address. But get this: there are 683(!) sales tax districts in the state.

How In-State Retailers are Screwed

Colorado says they’ll follow that $100,000 exemption limit for large out-of-state retailers (and make no mistake: anyone selling $100,000 worth of tangible goods just to this one state of 5.6 million residents is “large” in my book!), but there is no exemption for small in-state retailers: if we ship within the state, they are requiring us to charge the exact correct amount according to the specific delivery address. So there will need to be a data base that details which of the 683 tax districts gets how much tax according to that address, and which has to be available 24×7 for instant answers because buyers are impatient enough already when dealing with online shopping carts. 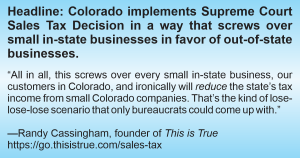 I am not aware of any plugin for True’s shopping cart that will do that accurately at this time. And if there is one, I doubt it would be cost-effective for the extremely small amount of in-state physical-product sales we do.

And even if there is an accurate free data base, that doesn’t overcome the next obstacle: 73 of those 683 taxing districts require direct payments, which means getting an account set up in that district, rather than just submit the payment through the state portal.

There is a company offering to do it for us “from $9.26 per filing.” That does not help small retailers like True, which does a very small amount of taxable sales: the total of Colorado sales taxes we collected for the entire state for all of last year was just $18; the vast majority of our sales are out of state. Yet if we end up owing 70 cents in tax from a $12 pack of Get Out of Hell Free cards to a specific non-state-collected taxing district, we’re supposed to pay $9.26 (or more, with our small volume), or spend an hour for each district myself to do the paperwork, to send them that 70 cents?

Nope: Ain’t Gonna Do It. My only alternative so far is to shut down all sales of tangible (shipped) goods to Colorado addresses until the state pulls its head out of its …uh… actuary tables.

This implementation by Colorado actually favors out-of-state businesses over in-state businesses, all in an effort to make online retailers pay their “fair” share of taxes.

All in all, this screws over every small in-state business, our customers in Colorado, and ironically will reduce the state’s tax income from small Colorado companies. That’s the kind of lose-lose-lose scenario that only bureaucrats could come up with.

It’s right up there with the last time the state did something stupid in this realm: despite seeing that Amazon immediately canceled the affiliate relationship with businesses in state after state after state that tried to force Amazon to collect sales taxes by declaring that affiliates created nexus (despite the 1992 “nexus” ruling), Colorado’s lemming-like legislature passed a law to declare that Amazon affiliates created nexus for Amazon. Sure enough, as everyone but the legislature expected, Amazon immediately kicked out every Colorado-based affiliate (including us), and the state lost all the tax income from those payments, plus the economic benefit of thousands of small businesses having more money to spend in the state. Absolutely moronic!

Standing Up for the Little Guys

The Denver Post editorialized that this is a “mind-boggling” state of affairs. They call for reform of the complexity that “is likely to burden small firms in a morass of red tape” facing “a costly accounting nightmare.”

Absolutely true, but they miss the much-more-obvious alternative that the smallest businesses will choose — what it’s coming down to for us: many small businesses will shut down sales to Coloradans, and stop the small amount of sales we used to collect for the state multiplied by every company in this position, rather than subject ourselves to this “costly accounting nightmare.”

Still, at least someone is pointing out the obvious burden to the state, because someone at the Denver Post actually thought about the ramifications, unlike the state bureaucrats.

This seems to be the default position for every state that collects sales taxes — “Well, OK: we won’t make out-of-state companies collect just a little tax (because it looks like we have to do that per the Supreme Court).” Yet will they also let their in-state businesses twist in the wind?

That’s clearly what Colorado is doing.

So don’t be smug: if your state collects sales taxes (and the vast majority do), your smallest local businesses are in mortal danger, starting whenever your state decides to implement this. And believe me, they’re wanting to get it going. Colorado couldn’t even wait until January 1 …until large businesses forced the issue (see update below)!

I don’t see that it’s possible for the state to clear this up before this all starts on May 31*. Thus, I’ll encourage Coloradans especially to stock up before then on any of True’s physical products, because I’m going to have to refuse in-state orders starting May 31 — again, this is for taxable goods, which means stuff sent in the mail, not email subscriptions.

The state announced a delay in implementation of the new rules until “at least May 31,” so True’s in-state sales will continue until “at least” that date*.

“This additional time will give the state legislature an opportunity to find innovative solutions to streamline and simplify our sales tax collection laws,” announced Michael Hartman, executive director of the Colorado Department of Revenue. “We will evaluate the need for another extension as May 31 nears.”

So maybe this deadline will be extended again.

I was far from the only small business in Colorado to point out the obvious flaw in the state’s implementation (see my Letter to the Editor of the Denver Post above). We’ll see if a workable solution emerges: there is at least hope! “The Department of Revenue agrees it is important for the state to take the time to get this right,” Hartman said. Gee: ya think?!

But get this: “Despite the automatic reprieve, the Department requests that businesses with the sophistication and capability to collect and remit sales tax on internet sales based on where the good or service is being delivered do so as quickly as possible.” The reality, of course, is that one-man shops don’t have that capability …so now “sophisticated” (aka huge) companies are at a disadvantage instead. That doesn’t happen often!

As noted in the section Not Just Colorado! above, this whole thing involves other states, too. Let’s hope other states will learn from Colorado’s misstep.

The state did extend the deadline through June 30, but that’s it. Even though there is still no solution available to us at any price we can afford, the rules are now in place as described above.

When I did my quarterly review of the books last week, I remembered to check to see what the status of the rule was …and found it was not extended again: it did go into effect on July 1. So obviously the only solution for me is to refuse to sell any taxable items to residents of my state. I’m going to see if I can find someone who wants to sell my products just in Colorado, preferably from a state that has no sales taxes (e.g., Oregon). They’ll want a cut, of course.

Meanwhile, True’s shopping cart is programmed to not allow checkout to Colorado residents if there are any taxable items (which includes ebooks, by the way) in their cart. One saving grace for Colorado: news publications are exempt from sales tax, so Premium subscriptions are not affected. Another saving grace: I checked, and my last taxable sale in Colorado was in May. Whew!

I’m sure my little spare-bedroom company isn’t the only one affected, and many others have probably shut down too. Which, of course, means the state not only will miss out on the sales taxes that would have been included in those sales, but all income taxes on the resulting profits, too, while companies outside the state benefit from increased sales, and they don’t have comply with the rule if their taxable sales to Colorado is less than $100,000. The Denver Post published my comment (see graphic above) on the situation: “That’s a lose-lose-lose proposition that only a bureaucrat could come up with.”

Sorry to our fellow state residents, but there’s no choice: this cuts out meager margins even more.