After rushing around Hong Kong, Tibet, and Chengdu, it was time for a little rest. With a four-day cruise down the Yangtze River, we won’t have to pack and unpack, or catch planes, for awhile.

At over 3,900 miles (6,300 km), the Yangtze is the third-longest river in the world (after the Nile and the Amazon). It stretches from the highlands of Tibet plateau to Shanghai, where it dumps into the East China Sea.

A Bridge Too Far

Interestingly, especially considering how the Yangtze divides China, this huge river didn’t have a bridge across it until 1957. They’re now making up for lost time; if I recall correctly, there are about 60 now, and about 50 more under construction.

There are two interesting things about the next photo. First, it shows how to get around when you’re in a hurry — a hydrofoil. We saw several of these running up- and down-stream, as well as ferries large enough to hold hundreds of people and scores of big-rig trucks with trailers.

The Yangtze is, like any other large river, a major transportation corridor.

But the second thing in the photo is the most interesting to me: on the hill are concrete coal storage bins. We saw lots of those along the river, typically with hillsides stained with a lot more coal dust than this.

But this is the only time we saw a barge being loaded with coal. It just parks at the bottom of the chute and they open the gates, and when needed they shovel the coal into the chutes by hand. With this long chute, the coal made a lot of noise when it ran. We could clearly hear it on our ship as we passed by: 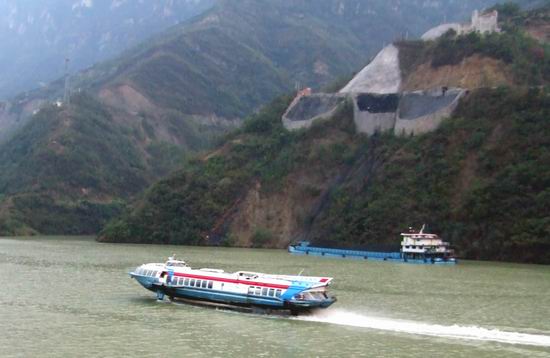 One side-trip we took was up the Shennong Stream to the “lesser” Parrot and Dragon Boat Gorges. Crews of six (including a spotter, four oarsmen, and the captain who did the steering) took groups of 15 plus a local guide up a very narrow passage. Now we got close enough to see some real scenery!

The oarsmen were called “trackers,” and boy, did they get a workout: they rowed non-stop for half an hour upstream, did a brief “tracking” demonstration, then jumped back in and rowed us back downstream — another half hour. And they didn’t look winded at all.

Our guide (standing, in the next shot) was a tiny little thing — she made Kit look big, and she just loved me! She could hardly have weighed 85 pounds.) Uh, what was I saying?

Oh yeah: our guide gleefully told us that traditionally, trackers worked naked, because that worked better with all the jumping in and out of the water all the time to get the boat through shallow spots. But now, with rising water (and lots of tourists), they wear clothes — though one of our guys kind of preferred an in-between method: 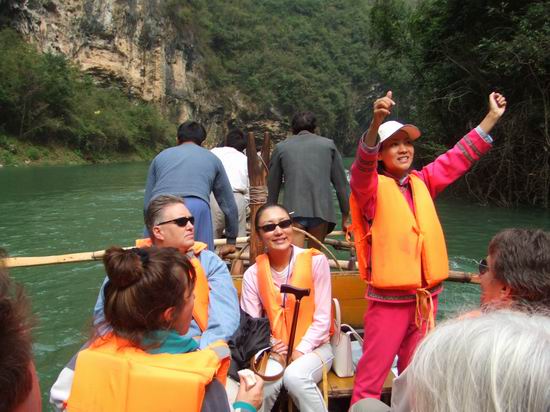 So, what’s “tracking”? That’s when they either jump into shallow water and pull the boat over very shallow spots, by hand, or they pop up onto the shore to pull it along the water, walking along designated “tracks”: 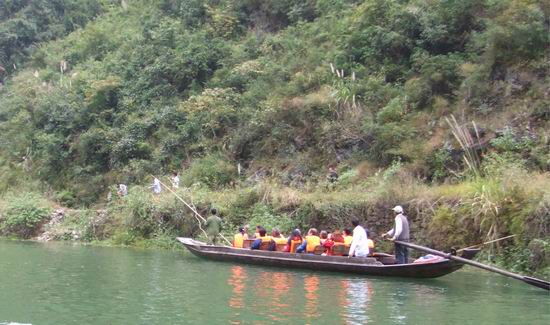 The rope they’re using to pull the boat is woven from bamboo.

In some areas along the Yangtze, where the canyon walls can be very steep, over the years the locals have literally carved tracks out of the rock walls: 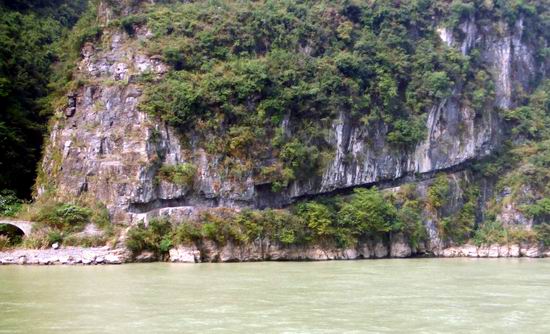 This shot was taken downstream of the dam, which is why it’s still above the water line.

Like any big river, the Yangtze is a special place, with a lot of stories. With the permanent flooding caused by the Three Gorges Dam, and the resulting replacement of more than a million people’s homes, it just has a few more stories than most.

2 Comments on “Cruising the Yangtze”