When discussing the Three Gorges Dam project, the Chinese guides loved to spout numbers. (27.15 million cubic meters of cement. 281,000 tons of metal structures plus 354,000 tons of reinforcing bars. 365 townships in Sichuan and Hubei provinces have been or will be inundated — a total of 632 sq. km. Etc.) What I found more interesting was the human factor.

By the 1998 flood, technology saved many lives: only 3,000 were killed — but 14 million were left homeless. The country suffered through a $24 billion loss in damage and disrupted economic activity from the 1998 flood alone. There is little surprise, then, that China was willing to spend $22.5 billion on the damming project in an effort to control flooding, the first main goal of the dam project.

Then there’s the hydroelectric power potential, which was the second main goal. When it’s fully completed in 2009 and the reservoir is filled, the dam will produce about 40 percent of China’s electric power needs* from its 22,500 MW power generation facility, coming from 32 generators.

That will be awfully nice, since that will reduce China’s coal burning by 31 million tons per year. In North America we still burn coal, but we’ve spent plenty on making it burn cleaner. Not so in China; you recall my talking about the smog in Hong Kong? It comes from Mainland China’s manufacturing and power-generation plants, like this one along the Yangtze — one of many we saw just like it:

The buildings to the left are high-rise apartments. We went through that smoke cloud, and I could smell the sulfur in it. It’s not just coal, it’s low-quality, high-sulfur coal — the most polluting kind. How would you like your bedroom window to face that stack?!

The third main goal of the dam project was to improve river navigation. We certainly benefited from that; the ride was very smooth.

To make room for the project, 1.2 million people have been relocated by the government. Whole cities were moved.

But I’m sure what everyone wants to know is, now that the dam has raised the water level in the Three Gorges area, is the scenery ruined?

I didn’t see the gorges pre-dam; I can only report what I saw on this trip: the scenery is breathtaking. So the answer is, the dam isn’t hurting the view — the smog is. Here’s my view from the dam facility itself: 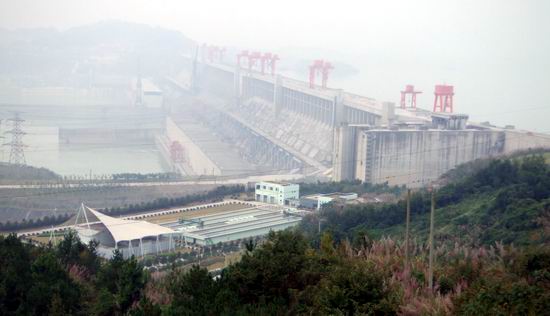 That’s literally the clearest shot I could get, standing very close to the end of the dam itself. Astounding. And disgusting.

The Dam Itself: High Security?

Getting to the dam facility was a humorous endeavor. After we went through the locks, the ship docked and we got on a bus to go to the tourist center. Security was fairly tight — there were plenty of guards, and their visibility was high: 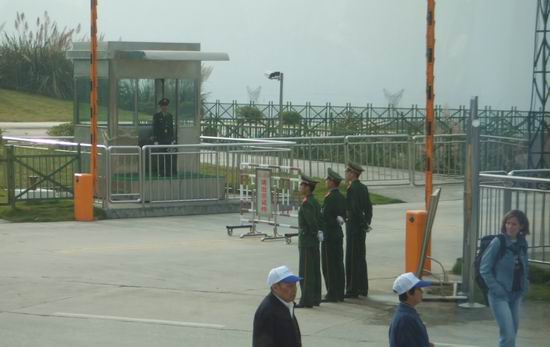 Before we could get anywhere near the dam, however, we were told we had to go through security screening. We were all taken off the bus and filed into the screening area. Any backpacks, handbags, etc. were run through an x-ray machine (like at an airport), and then we were all marched through a metal detector (like at an airport).

And while every single person set the metal detector off, not one was checked to see why! That’s right: the mandate seems to have been “everyone must go through a metal detector” rather than “everyone must be checked to ensure they don’t have a weapon.” So much for tight security. We then reboarded our bus (the same bus, where I could have left my grenade launcher in my seat) and headed in to the facility.

You’ve already seen the best photo I could take of the dam through the smog haze. To really get a view of the scale of the project, they had a very nice model: 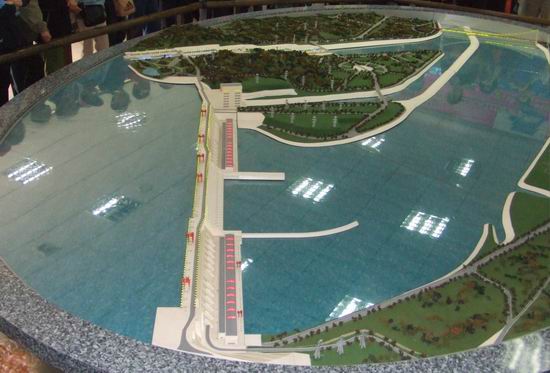 To the left is upstream — the newly created reservoir. At the far end of this model are the locks, where ships pass through five stages to get past; access or exit is via the upper channel, under the bridge at the right.

See the other channel, on the close side of the big “island”? There’s what looks like a building right up against the dam. That’s an elevator for smaller ships that are in a hurry (and can pay for the privilege): they steam into the building, the door is closed, and the elevator lifts or lowers them and their water to the top or bottom, and then they can continue on after just one lifting, rather than wait for the five-stage lock process. Wild!

Then there’s the major structure of the dam itself; the red lights indicate the power generation turbines. (The lights don’t add up to 32; there are 12 generators on the near side, 14 on the far side, and six in an underground facility south of the dam.)

A dam is either an environmental disaster that destroys scenic beauty and disrupts fish migration, or it’s an environmental godsend that allows for flood control and the generation of clean power. My take: there are more pros here than cons. Anything that keeps 31 million tons of low-quality coal from being burned every year is a great thing.

On the other hand, only time will tell. The Economist has a new article, The Three Gorges: One Dam Thing after Another, that talks about geologic stability problems upstream.

I’ll finish with before (17 April 1987) and after (7 November 2006 — and note the water level is not all the way to the top yet) satellite imagery. Throughout my trip I wondered what the difference was on a macro scale, and I never saw anything like this photo pair in China. But once home, I found them easily — taken by U.S. spy satellites: 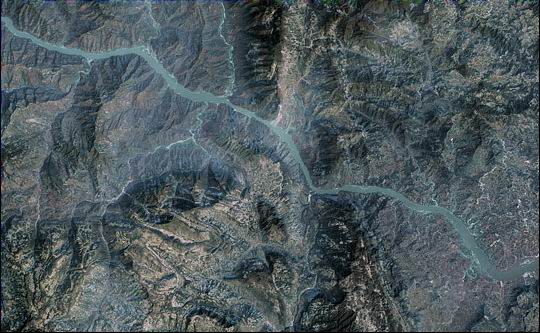 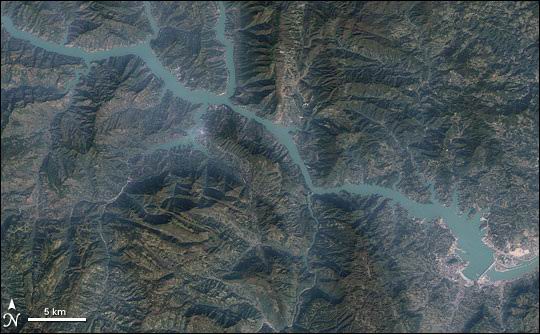 All in all, the Three Gorges Dam is an astounding feat of engineering. I hope I never hear that it has failed.

14 Comments on “The Three Gorges Dam”