Readers wanted to see the photos that go with this story, about the prisoner-altered State Police car-door decal in Vermont. It ran in True’s 12 February 2012 issue:

A Different Kind of Corrections

Vermont State Police Sgt. Michael Roy noticed something odd on a decal on his police car: One of the spots on the cow in the state seal had taken on the shape of Sus scrofa domesticus. That’s a pig, as in the derogatory term for a cop. Investigation found that it had been that way for several years; a prison inmate-artist had changed the insignia on the prison-made decals. Authorities say they will hunt down all the altered decals. “It’s going to be ‘Where’s Porky?’ instead of ‘Where’s Waldo?'” said an ex-cop turned state legislator; they guess there may be about 60 in circulation. Replacing them will cost taxpayers $13 per decal. What, if anything, it costs the offender may depend on whether he’s still inside and thus subject to prison discipline. “I don’t know if there is a criminal charge,” said the state corrections commissioner, but investigators say it will take “weeks” to sort it all out. (AC/Burlington Free Press) …I can’t wait till someone gets a good look at the prison guards’ shoulder patches.

What the Vermont State Police decals are supposed to look like — right from their web site: 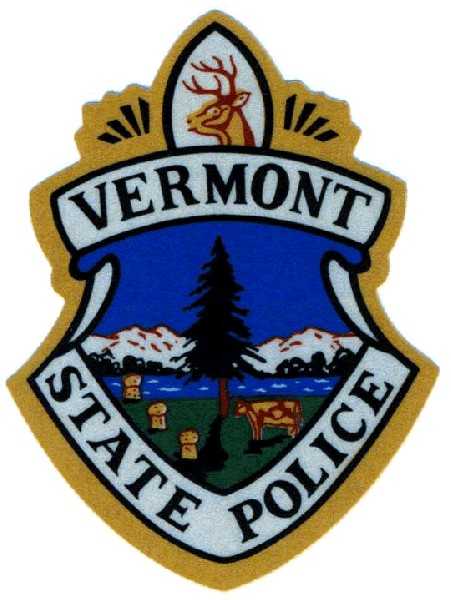 The cow and three sheaves of wheat (no, those aren’t giant toadstools) are supposed to represent the state’s dairy and agriculture industries.

But a prison inmate altered the cow on the seal just slightly: 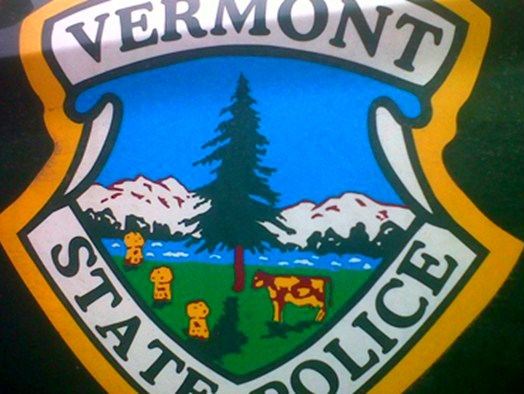 A closeup of that altered cow: 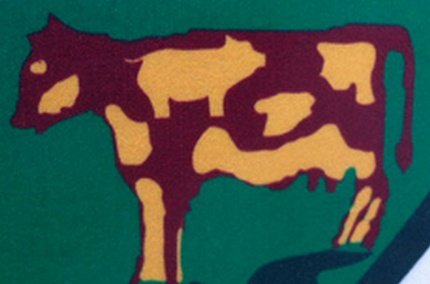 The investigation is now closed. It was determined that the alteration was made in November 2009 by an unknown female inmate at a prison work center in Windsor, Vermont.

“At this point all we can tell is how many women had access to the file, and who they were,” said Corrections Commissioner Andy Pallito. “Really being able to tell who manipulated the file last is virtually impossible without somebody stepping forward and saying ‘I did it’.”

Except whoever made the alteration wasn’t necessarily the “last” one in the file, eh Andy?

At least one resident is campaigning for the state police to keep the altered decal as official.

“It is a really good opportunity for us to band together as Vermonters and show that we can have a laugh in a little bit of an awkward situation,” says Cid Sinclair, who has created a Facebook group, Save the Vermont Pigs. Well over 1,000 people have “Liked” the page. Sinclair has also created a petition to demand that the governor adopt the decal, rather than spend tax money to fix it. Hundreds have signed.

He has the backing of Lt. Governor Phil Scott, at least. He “loves” the idea, and says the prisoner’s alteration was “disrespectful,” but “We cannot let them win and if you let it bother you then they’ve won.”

The state police, however, have refused to comment on the suggestion. Apparently the picops prefer to let “them” win. Hey: don’t have a cow, man!