It’s another story that absolutely demands the accompanying illustration — in this case, a mug shot. But trust me: read the story first! It’s from True’s 20 November 2011 issue:

Oneal Ron Morris came up with a special concoction — a combination of cement, mineral oil, and Super Glue — which he brought to “pumping parties,” according to police in Miami Gardens, Fla. At such events, Morris allegedly injected people’s buttocks with his formula to round them out. Police got on Morris’s trail after a woman allegedly treated by Morris nearly died when his so-called “Fix-a-Flat” material spread through her body, leading to infections; she is still recovering. The 30-year-old victim, who paid $700 for the procedure, was “screaming in pain” and made Morris stop, police say. It took months for investigators to catch up to him, but when he was arrested for practicing medicine without a license and causing bodily harm, officers were so shocked by his appearance, they took full-length mug shots. It’s not that Morris is a man who looks like a woman, but rather that Morris had apparently been using the goo on himself: he has a gigantic butt. (RC/Miami Herald) …Whereas most men arrested for hurting women are gigantic asses.

And for the Astounding Mug Shot

(Warning! Be sure to swallow your coffee/other beverage before scrolling down!) 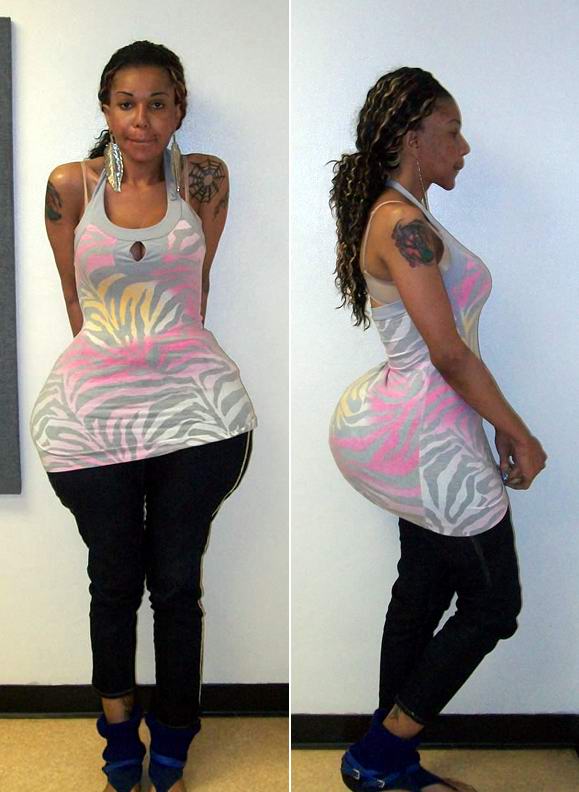 Then It Gets Weird

The odd part? I had two butt-plumping stories this week, but I pulled the other one because it really paled in comparison to this one.

The second was about how federal authorities began an investigation after an exotic dancer from Baltimore, Md., was diagnosed with silicone in her lungs(!!). The silicone was traced back to injections the unidentified woman received in her buttocks, allegedly given to her by Kimberly Smedley, 45, of Georgia.

The dancer said she went to Smedley’s hotel room in Washington, D.C., for the injections, which cost $4,000. Investigators don’t know how many potential victims there are, but they found records showing Smedley had rented rooms in that one Washington hotel alone more than 100 times over 18 months. She has been arrested.

The crazy thing isn’t that there are two such cases, but rather to consider these are two that authorities have found out about — and, of course, that there are that many people willing to go to hotel rooms and back alley “clinics” to be injected with unknown substances by people of unknown training and ability.

Well, that and the concept that skinny people with gargantuan asses is somehow “beautiful”….