When readers unsubscribe from True they have the opportunity to send a comment. Many give the “reason” they’re unsubscribing, and some even apologize (not necessary — really!)

The two most-common reasons people give for unsubscribing is “I’ve upgraded to Premium” (woo hoo!) and “I’m just too busy to read it” (bummer! Life is too short not to have some fun!) This weekend, one woman put in a rather startling reason:

I replied: Exactly! I focus on thinking, rather than reacting. On getting along, rather than striking out. On considering others’ opinions, not insisting on being right. I consider those good things. So you’re unsubscribing …why?

Cathy in Texas: Yes, but, admit it. We may find the absurdity of others amusing, but while we’re laughing at our own absurdity or that of others, we’re focused on absurdity.

Randy Cassingham: Not me: I focus on how to live a better life, and make the world a better place. Why do you choose to focus on the negative?

CiT: We are apparently not anywhere near the same wavelength, but I do thank you for being who you are. 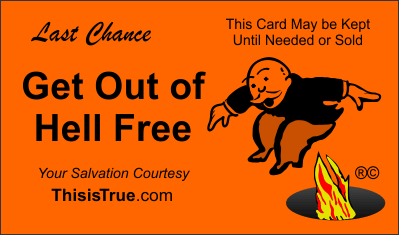 CiT: I still hand out your Get Out of Hell Free cards from time to time, and I think they are hilarious. (I used to be quite religious, so I can laugh about that now, as well.)

RC: I have a lot of fun with them too. That is an example of taking a “nasty” situation and turning it positive, in my opinion.

CiT: I don’t know why the newsletter affects me the way it does. What difference does “why” make, though? If caffeine makes me bounce off the walls, it is wise not to drink coffee.

RC: Simply because you may learn that it’s not the coffee, but the sugar you put in it! The point is, True is there to help people be more thoughtful — that’s why I bill it as “Thought-provoking entertainment.” You’ve got to do what you’ve got to do, but I maintain that it’s a lot more healthy to focus on the positive, rather than the negative — just as you seemed to say at the start.

CiT: On second thought, I think I’ll sign back up. Ha! Hey, it’s a woman’s prerogative….

RC: It is indeed. Enjoy — and remember to look at the positive side! 🙂

CiT: We are a funny race, we humans.

We are indeed, and I think I’m on a closer “wavelength” than Cathy might have thought.

Why the Stories Give me Hope for Humanity

Now and then, a reader asks me why I haven’t gone insane from writing True for so many years — seeing such stupidity week after week, year after year. True is in its 18th year! And only a fairly small percentage of the stories I see make the cut: many more are tossed each week than used. Yet despite this incessant flow of oddness, I increasingly have more hope for humanity as time passes, not less. Why?

I’ve said before that far from being a cynic, I’m a frustrated optimist, and perhaps that attitude has something to do with it — the “optimistic” view means looking for the positive. Readers often say it this way: “I thought I was dumb, but after I see what people featured in TRUE say and do, I end up feeling pretty good about myself.”

We all do dumb things sometimes. We see ourselves in the stories, and hopefully we’re “not that dumb” and vow to think more, and be stupid less.

That’s progress! That’s cause for optimism.

A reader on Facebook said this over the weekend, in response to something I posted there: “My father told me every day that I was stupid and ugly and useless and an ass. I realized only in my 40’s how completely I had internalized his assessment.”

Wow. I don’t know if True helped him put his life into a more positive context, but I’m sure the stories reinforce that it was his father who was completely off-kilter, not himself.

That’s cause for optimism too.

And in the middle of that conversation with Cathy, I got this note from frequent correspondent:

“Randy, if anything, I have to give you props for stamina. After some 17 years of enduring outraged clods over the most innocuous items, you still believe in the evolution of human intelligence. ‘For them that understand, no explanation is necessary. For them that don’t understand, no explanation will suffice.’ But it doesn’t hurt to reinforce it on occasion, and a few WILL be reached. Laudable goal, but not everyone has the fortitude to keep on in the face of adversity.”

In other words, at least some readers notice the optimism behind This is True. Maybe most of them, even if they haven’t thought about it specifically.

Yes, True’s primary mission is entertainment, but who are we really laughing at? My answer: humanity — ourselves, and we are better for that.

I categorize This is True as Social Commentary. One story doesn’t usually create very deep commentary, but over time, you bet clear messages emerge. It gets pretty deep sometimes: it’s why these blog entries often end up with dozens of — and sometimes more than 100 — comments. Readers examine, in detail, what it means to be human. What it says about people in general that there are those who, say, spend thousands of dollars on back-alley practitioners to make their butts huge when most people are trying to figure out how to make their own smaller.

Yeah, even the truly tragic stories make me more impressed with humanity, not less: 18 people walked by — even stepped over — a little girl run over in the street rather than helping her (tragedy!), yet when they heard the story, millions of people all over the world decried the inhumanity behind that horror and vowed to not let it happen around them (vindication of humanity!) People didn’t say “What do you expect of godless Communists!”, they said “Not here” — whether they were in the U.S., in Europe, or (most importantly of all) in China, where that happened.

That’s powerful. And that’s cause for optimism.

Whether it’s a truly funny story or a tragic one, I gain hope because people care. They agree that, for instance, zero tolerance is an outrage. That agreement makes it clear to me that people care that we’re terrorizing our own children, and they ask me how to stop it. (Answer: by standing up against it in your own community, not “even if” it’s not your kid who is involved, but especially if it’s not your kid!)

If we just gave a collective shrug, that would be the horror. I fully admit it: I expect you to be angry when you read about Yet Another Zero Tolerance Outrage, because I want you to do something about it. But we’re all busy: we can’t pay attention to everything — but we will if our blood is boiling.

And that power changes the world.

I get feedback that True does, in fact, change the world. Sometimes, it’s just the world of one person. Other times, it’s bigger: for years, I was the only columnist writing about the outrages of zero tolerance and what it was doing to society (not just in schools, because schoolchildren grow up and enter the workforce).

Story after story, and just one lone voice saying “This is wrong” year after year. But then, magic: another columnist featured an absurd ZT case, and then another. Then newspaper editorial boards started printing “This is stupid” editorials, and then state legislators started getting heat — and started doing something about it. Laws have started to change.

The fight isn’t over yet, but my match lit a lot of candles and made a difference. How? Because readers forwarded my stories to legislators, and to other columnists. “This happened in our back yard, and it’s wrong!” they said. I know, because many of you copied me on those letters. Because they saw ZT story after ZT story in True, readers knew these outrageous stories weren’t aberrations, but part of a pattern; they got mad about that, and they did something to help make it stop. They made a difference; my effort to get them angry worked.

It wasn’t “manipulation” — these stories were really happening. I just had to make it clear that it was, in fact, a pattern; it was, in fact, not just confined to one school, one town, one school district, one state, or even one country. The idea was spreading, and now — finally! — it’s starting to contract.

That’s the power of collective outrage, sparked in part by one guy with a mailing list — for an entertainment publication.

Optimistic? You better believe it!

And that’s why I bill True as “Thought-Provoking Entertainment.”

Entertaining, sure. But it’s so much more.

About six weeks ago, I was on a site that had a Latin slogan. I thought to myself, “What would True’s Latin slogan be?”

About a second later it hit me like a bolt of lightning:

Satisfactory! All the more to be optimistic about. 🙂

So are you saying “Of course This is True is optimistic!”? I’d love to know why you have thought that all along.

And if you’re saying “Huh: I hadn’t thought of that before!”, I’d like to hear from you, too: are you slapping your forehead because you didn’t realize? Or does True make you feel worse about humanity? Or what? Tell me and other readers, and why: Comments are enabled below. No registration is required, but I do ask for your first (given) name and location for context, and your email address so I can reply (it is not published).