It’s quite a search sometimes for Just The Right Person for the Honorary Unsubscribe. Sometimes I have to choose one person over another when both would be great. Sometimes it’s a struggle to find someone I think really should get the honor.

And sometimes I get a heartwarming laugh when I’m looking for someone. This week, it was Shirley Jean Rickert, who was a cute curly-blonde child actress in five “Our Gang” comedy films in 1931 (which was the pre-Alfalfa and Spanky era) and in five “Mickey McGuire” comedy films, a competing series starring Mickey Rooney as “Tomboy Taylor”.

She said she had a lot of fun making movies as a child: “just kids playing together,” she said in a 1999 interview. “We had fun. The mothers on the other hand, were awful. Stage mothers are just vile women, including my own.” 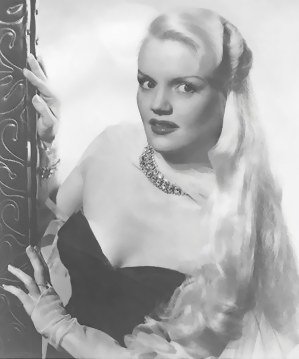 Being a movie star, she said, was her mother’s dream, “but it wasn’t mine.”

And indeed, Rickert never was successful as an actress as an adult …so she turned to burlesque.

There, too, her blonde hair was her trademark: by then, it was down to her waist. It inspired her manager to give her a stage name: Gilda and Her Crowning Glory — and it stuck!

She acknowledged that she was a stripper, but things were different in her day. “I see more flesh in television commercials today than I used to see in burlesque,” she said.

Rickert retired from show business in 1959, and died in a nursing home on February 6 at 82. So yeah, someone else was the official honoree this week, but I still got to tell you about the little gem I found too.

Her web site has more info and (itty bitty) photos.