I was a bit taken aback by a letter I got this week. The subject line was “Can I be a charity case?” and it was from Bill in Pennsylvania. He wrote:

Please ask your readers if any of them would love to be charitable and donate a premium sub? Or get 24 of them to donate a buck for me? As you can see, I am a gov’t worker….so we don’t get much. Plus I have a 17 month old and another on the way…due in mid June….. plus 3 step kids that have a deadbeat father….so it’s hard to justify to the wife spending the $$….. but I can’t get enough of your mailings! So, beg the people to hook a man up!! Oh, and if you do post any of this, please don’t mention my full name or email address showing where I work.”

But It Was Shocking to See

But I’ll say the domain in this case since it’s incredibly relevant: irs.gov. Yep, the Internal Revenue Service. (For those outside the U.S., that’s our federal tax agency.) 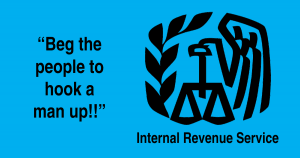 My first thought was that it was a gag — a spoofed email address trying to get the IRS some bad press or something. But I checked the free distribution, and Bill is indeed a subscriber at the address he was writing from — and has been for some time. Plus, a peek at his message’s routing headers confirmed that it did come through IRS mail servers, from their service center in Philadelphia.

Now, as it happens, I have a good friend (who also happens to be a Premium subscriber) who works for the IRS, and I asked her what she thought of the note — and my reply to it (which is below). Due to the situation, I’m keeping even her first name private, but here’s what she said:

I am, frankly, disgusted and sickened that an IRS employee, from anywhere, would do this. First of all, sending an email to you from his irs.gov email address is illegal. And asking for a donated premium subscription adds even more to that infraction, as he essentially would benefit and that violates our Rules of Conduct. In fact, I’m surprised he’s allowed to receive a TRUE subscription, as we have been told we may NOT subscribe to any ‘list’ type emails, e-mags, etc. They screen our mail — guess it’s a good thing TRUE gets a clean bill of health!

As a local Union Chapter President, I have represented employees for illegal email charges before and management generally gets pretty brutal. You have several [IRS employees] on your Premium list and more on free TRUE [distribution, at our home addresses]. One of my best friends — a Chapter President in Kansas City — handed me a GOOHF card at our New York convention in August! I was handing them out also — they were a hit all around. I absolutely love your answer! Way to go, Randy!

And just what was my reply to the request for a handout? “Sorry, Bill, but I don’t do that. If I did, it would be for other ‘gov’t workers’ — the ones who don’t make professional wages: our soldiers in Afghanistan and Iraq.”

To be clear, I am not suggesting any sort of program for servicemen and -women, as great of an idea that may be: it would be almost impossible to tell who on my free distribution is military. Even if I narrowed it to “.mil” addresses, I wouldn’t know if they were soldiers, Pentagon workers, or even contractors. So please don’t suggest I “do it!” and, especially, don’t send money hoping I will.

It’s not illegal (or even against policy) for many government workers to subscribe to newsletters like this. And I don’t object to it, unless they’re reading on “company time” (Bill’s message was time-stamped at 7:40 a.m., which I’m guessing — and hoping! — was before his work day started).

My IRS friend said someone in Bill’s position makes $45,000-$54,000 per year. Might someone struggle a bit on a $50K salary? Sure, especially when they have kids. But to have a good job like that, with terrific benefits including health care, and still ask other hard-working readers to cough up for him is pretty outrageous.

And I know a good number of you make less than that, have kids, don’t have government employee benefits, and still manage to pay your bills and have some “extra” things like a Premium subscription. It would be an absolute slap in your face for me to ask you to pay the way for Bill.

Bill says he “can’t get enough” of my work, where I talk plainly and say what I think about outrageous or ridiculous situations. So here’s my conclusion: I’m happy for Bill to upgrade; if he just cut out one Starbucks a month it’d be enough to afford an upgrade and a gift subscription for someone else!

If you’re at all outraged by this — either that I was too hard on Bill or too easy on him — it’s worth reading the comments. (And there are definitely examples of each side in the comments!) Be sure not to miss the response from Bill himself, which I have confirmed really is him.

A Premium subscriber did buy Bill a gift subscription, noting “True was something nice you appreciate, and you tried to say so — and it all went fubar. Anyway, I know where you’re coming from, and right now I can afford to do this, so I hope it makes up for some of the rest of it all. Thanks for doing right by those around you, here’s something in recognition for that. Keep those kids going, and good luck getting through the everyday drain — I hope this helps.”

As I said when I posted Bill’s response, my admiration for him was restored when he sucked it up and responded to his critics (including me) in the comments. And it went up further when he refused that gift subscription, asking me “Is there any way to donate my donation to someone? Say a cop or serviceman?” I told him that really, he could accept — but he said it wouldn’t be right and again refused.

Right On, Bill: I hit him over the head and he said “Ouch!” — but he “got it.” My respect for him and his character is now fully restored. I will find a cop or serviceman (or -woman) to give it to, and will do so even if the person who donated it wants me to refund him for it.

I was heavily berated in comments not posted (sent directly to me by email) that I savaged Bill without having “full information” — which of course is not possible unless I go live with Bill for awhile.

I could tell that these people were berating me without having read the comments first — they were criticizing me for doing to Bill what they themselves we doing to me. None of them asked me if I had more information that I didn’t publish (and yes, I did!)

I like to say one needs to think before striking out — and I did think about it before publishing this in the first place. Too bad so many of the people who pounded on me didn’t extend the same effort.