True contributor Alexander Cohen and I had quite the discussion about the Canadian woman desperately trying to get police help when there was an intruder in her home.

Presumably she wanted to use text chat to contact the police rather than call on the phone to keep things quiet, and not draw attention from the intruder.

Let’s start with the story:

“I need help, he is going to come, he is in the house,” a woman typed to the police. The intruder wasn’t her only problem: intending to contact the Durham Regional Police Service in Ontario, Canada, she had instead found the live chat service for Durham Constabulary in England. The constabulary presumably wasn’t in a position to send its own officers in excess of 3,000 miles away to rescue the woman, but that didn’t mean it couldn’t help her: a worker in the agency’s control room reached out to the Canadian service, which dispatched officers to the chatter’s Ajax, Ont., home. A suspect was arrested and charged. (AC/CBC, Washington Post) …If the victim had done her research, she might have learned that it’s not recommended to use text chat to contact police in an emergency, because it’s too complicated.

Alexander’s original tagline indicated that other police departments needed to implement chat capabilities on their web sites. No, I said from the standpoint of being on our regional 911 Board, which helps fund our dispatch center: searching for a police web site to look for a “Chat” option is a terrible idea. As demonstrated in this case, the caller reached the wrong Durham police, which is a predictable failing when someone in a panic is trying to get help. She was quite lucky they had the ability to pass along her plea in a reasonable amount of time.

So what would be better?, he asked. Simple text messages. The U.S. is working to get all PSAPs — Public Safety Answering Points, aka the specific places 911 calls are answered — to accept text-to-911 calls. A lot of Americans have no idea that it’s even possible, but the FCC has rules about how such messages are to be handled. 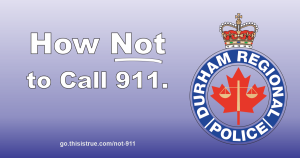 It doesn’t require looking up an address. It doesn’t even require Internet access, and is built in to (all?) cell phones. It uses the same number as voice emergency calls.

When needed DO try to call 911 even if you don’t have cell service (say, you’re in a rural area): if any cell tower sees the call, it’s required to connect you to a PSAP if at all possible, even if you’re not that carrier’s customer. Even if your service has been disconnected for non-payment. Even if it’s an old phone with no service contract at all.

But the lady in the story is from Canada. What are their procedures and rules?

Well, they’re totally confusing, which is a bad thing when it comes to getting help in an emergency!

First, they only offer text-to-911 for the “DHHSI community” — the “deaf, deafened, hard of hearing or speech impaired.” And only if you register in advance. And only if your phone has “T9-1-1” capability.

So, if you’re a Canadian “DHHSI person” please, right now, get your phone registered in the program if you haven’t already. The time to do it is not when you have an emergency. Do not call 911 to “test” whether it works; check with your carrier instead.

I wonder what percentage of Canadian “DHHSI people” have registered already? My guess: less than 50 percent — probably much less. It’s a disaster in waiting, not to mention the need for those who are not “DHHSI persons.”

Really, Canada, you need to get with the program: enable text-to-911 for everyone. Pre-registering only specifically compatible phones is not the way to go. Not only every Canadian, but foreigners coming to Canada on holiday or business should be able to call and text 911 for emergencies.

As for other countries, I don’t know. I invite those with accurate knowledge to comment below with details about their country’s systems. (Is there an E.U. standard in this realm? Good question! A U.K. standard? I sure hope residents know.) Don’t guess, find out before you need help.

I doubt text-to-911 is fully rolled out to the entire U.S., but we’re working on it. Even my rural Colorado area has had it for several years.

Still, if at all possible it’s significantly better in an emergency to call if you can: that automatically transmits your GPS location so help can be sent your way, and it’s much faster for the call-taker to get information by voice. But texting has the advantage of working quite well on phones with low batteries, or a poor cell signal, and should be tried as a backup if necessary.

And, of course, when you need to be quiet.

Though the last time I called 911 I was shocked that my phone made a loud beeping sound as it connected, which I’m pretty sure is an alert in case it’s a pocket call in a completely not-emergency setting, which is depressingly common. If I was trying to call for help in (say) a robbery situation at a restaurant? Yikes! So the lady in the story above was definitely smart in that she was trying to get her help message out quietly.

Anyway, Alexander’s revised tagline is much more clear about how …unclear the situation really is.