Jerry Falwell died this week. There’s quite a bit of traffic coming into my page where I dubbed Falwell one of the American Taliban in disgust over his using the 9/11 terrorist attacks to further his own agenda. I followed some of those links back to the blogs which were quoting me, with titles such as “JERRY FALWELL IS DEAD. Good.” and I’m glad he is dead. Indeed there were so many that I Googled the combination of “Cassingham” and “Falwell” …and got a couple of hundred hits.

And what timing: I just finished updating blog postings from 2002, which included an entry titled Evangelical = Hatemonger? (which, I’ll hasten to add, was not sparked by me, but by a Christian pastor who is sometimes ashamed to be known as a man of the cloth.) Falwell is a supreme example of what Pastor John was talking about in his letter there.

It will be interesting to see what people have to say about Falwell in the comments to this entry, and whether anyone cares to defend his zealotry — just the sort of hatred and shit-stirring that led our founding fathers to decide that a “separation of church and state” was a good idea when setting up our country.

Falwell certainly didn’t believe in that tenet: “The idea that religion and politics don’t mix was invented by the Devil to keep Christians from running their own country,” he said in a sermon “celebrating” the country’s bicentennial (July 4, 1976. Source: Positive Atheism [Link removed: no longer online]). Though my favorite quote there was something he said on CNN in 1997: “Grown men should not be having sex with prostitutes unless they are married to them.”

I’m sincerely hoping that’s not a slam on Mrs. Falwell.

Goodbye and good riddance, Mr. Falwell (using the title “Rev.” is an insult to the men and women who truly believe in salvation). May your shoes be filled by a true spiritual leader who doesn’t believe that their way is the only way. There should be room in his or her heart for those who don’t seriously believe, as Falwell did, “If you’re not a born-again Christian, you’re a failure as a human being.” To see a failed human being, Falwell needed only to look in a mirror. 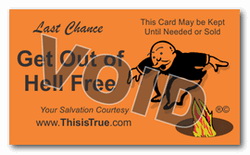 Last, regarding Get Out of Hell Free cards: Falwell’s is most definitely stamped “VOID”.

I’m going to hell again, I guess, for an editorial I wrote for Friday’s free edition (above). In it, I note “It will be interesting to see what people have to say about [Jerry] Falwell in the comments to this entry, and whether anyone cares to defend his zealotry.”

I should have been more specific: I meant a thoughtful, reasoned defense, and there has been precious little so far (see comments). And despite my asking people to make their remarks in public, on the blog, email flows in. Such as Stephen:

Geez, Thank god I never upgraded. I love it when liberal hatemongers can’t seem to get past their own hatreds so much they don’t realize that much of what they perceive as hate is nothing of the sort.

So… preaching hate is fine; objecting to it is an opportunity for name-calling. And isn’t the interjection “Geez” a diminutive for yelling “JESUS!” as a curse? Tsk tsk. And I thought not capitalizing “god” is supposed to be an insult to Him. Does that mean Stephen is going to hell?

There’s a reason that less than a third each of the public registers as either Democrat or Republican — the largest “party” by far is independent. The two parties, by their insistence that everything has to be black and white (or red and blue) alienates voters who know that there is more to talk about than the extremes.

More of us are in the middle than at the edges, and we can, will, and should call others to task for the damage they cause by preaching hate, no matter what side of the political spectrum they’re on.

Yes, the “normal” unsubscribe rate is about double this week, representing people who would rather run and hide their eyes than actually debate important issues. But that’s still a very small number — well under half of one percent of the readership. I said what I thought needed to be said, and I’ll suffer the circulation drop proudly.