A Letter from Roland in Kent, England (where my family name comes from), really got spinning through my mind, because it really helps to put everything in perspective. Let me explain — starting with Roland’s letter (the italics are from the original):

I’ve renewed and, like you say, hope to be on the dist list for many years to come. I think This is True does a sterling job, although it can be enlightening and frustrating at the same time; the phrase ‘I can’t believe someone could even think they could do that’ can cover disbelief, shock, anger and outrage, and I find myself hit by a variety of feelings whilst reading. That said, we need to know these things because we can’t fight obliviocy if we don’t know what the obliviots are up to. Thanks again for a great and entertaining newssheet and long may you continue you publish.

The Art of War

The idea that “we can’t fight obliviocy if we don’t know what the obliviots are up to” is the “know thy enemy” strategy, which is from The Art of War, attributed to the Chinese military philosopher Sun Tzu, who was thought to have lived from around 544 to 496, BCE. That pithy summary, though, doesn’t come close to capturing the true genius of his teachings on the subject. Here is a much closer translation of what he wrote:

So it is said that if you know your enemies and know yourself, you can win a hundred battles without a single loss. If you only know yourself, but not your opponent, you may win or may lose. If you know neither yourself nor your enemy, you will always endanger yourself.

In other words, knowing yourself is at least as important as knowing “thy enemy” — and reading about the obliviots, and feeling the “disbelief, shock, anger and outrage,” informs you about yourself much more than them. And that’s why it’s so, so important to “Think first (about the stories), and react later, if at all,” because your reaction is about you, not about the people in the stories, or even about my tagline commentary.

Sure the stories are intended to provoke a laugh (most of the time — that’s the entertainment part). But that’s only the first half: I also mean to provoke thought. I’ve said it in a variety of ways: This is True isn’t really “about” the obliviots featured in its stories, or the “dumb things” they do. It’s about the human condition; social commentary that informs us about ourselves as humans, and what we do that gets in our own way. Or, as Walt Kelly’s “Pogo” put it: “We have met the enemy and he is us.” 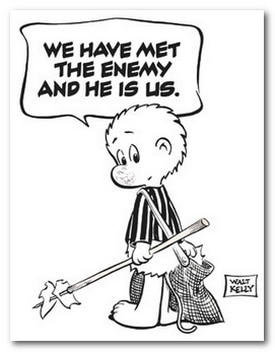 Interestingly, Kelly first used a version of that phrase in the foreword of his 1953 book, The Pogo Papers. (The first version: “…we shall meet the enemy, and not only may he be ours, he may be us.”)

What, back then, was the “enemy” Kelly was fighting against? McCarthyism. Who needs those dreaded communists attacking us when we do more damage attacking ourselves? Or, to put it in even more modern terms, who needs terrorist attacks when we willingly trade away our rights and freedoms for a false sense of security?

As Benjamin Franklin put it in the 1738 edition of Poor Richard’s Almanack, “Sell not virtue to purchase wealth, nor Liberty to purchase power.” — which has been paraphrased over the years as “He who would trade liberty for some temporary security, deserves neither liberty nor security.” Something to think about next time you see TSA trying to strip-search a toddler.

Humorous, thought-provoking entertainment not only can be used for powerful social commentary, it has been for a long, long time. That’s why I bill True as “Thought-Provoking Entertainment.” Thanks, Roland — and all the other Premium subscribers — for helping to make it possible for True to be published. Know yourself as well as your opponent, and let’s continue to fight obliviocy together.

10 Comments on “Know Thy Enemy”