Two Stories from Last Week brought complaints that True is politically partisan. The hilarious aspect to the two stories: neither had anything to do with politics, but the readers are so sensitive they thought they were political slams. There were a number of protest unsubscribes, including a Premium reader, which is very unusual.

Sheriff’s deputies responded to a residence in Bedford County, Va., on a report of gunshots. Mark Edwin Turner, 56, allegedly got into an argument with his girlfriend’s son, and Turner trumped the dispute by pulling a gun. The girlfriend shielded her son, so Turner shot her, deputies say. “During that time, she was shot a total of five times,” says Commonwealth Attorney Wes Nance. “All of those injuries occurring to her legs.” Turner was subdued with a shot from a beanbag round, and arrested. He is charged with felony malicious wounding, use of a firearm in the commission of a felony, and possession of a firearm by a felon. And what was the argument about? “What type of vehicle is best,” Nance said. “Chevy vs. Ford.” (RC/WSET Lynchburg) …Apparently, Teslas haven’t yet made it to Bedford County, Va.

After running the Tally Ho pub in Canterbury, Kent, England, for 20 years, owner Robert Easton-Park gave up on the venture due to rising costs. He converted the building to a residence for his family two years ago, but council planners have ordered him to convert his home back to a pub as it would otherwise be “a loss of a community facility.” Easton-Park is gobsmacked. “I’m not a developer selling it off to try to make money,” he said. (RC/Kent Messenger) …So whether he likes it or not, he has been ordered to be a Republican.

Does that first story seem political to you? (More on the second one in a moment). Well, reader reaction was swift, but there was only a smattering. I’m choosing not to identify the readers, even with a location; each bullet is a different reader’s comment.

The first came from a Premium (paid edition) subscriber:

I think that means “unsubscribe,” and the reader ignored my reply asking for details of the problem.

Each story is written by the contributor noted in the source area, in this case “RC” — me. While I do edit the stories by other contributors, I wouldn’t put words like that into their mouths.

The only thing we take verbatim from source stories is quotes — and that’s not a quote. I’m not sure what you mean by “imply something else.” I think it reads quite plainly; I was having fun by using alliterations (“Turner trumped” + “dispute drawing”).

Yes, there are more conventional ways to put it — and in 25 years I’ve used them all, so it’s more interesting to not be repetitive.

This is where it gets amusing.

I found that reader’s decision to not capitalize “Republican” to be disrespectful of the party.

Let me make this clear: the second story is also not political — at all. Not one bit of it. I figured most readers would really love the punny tagline in part because I was in the U.K. when I wrote it.

If you’re confused, this should help: 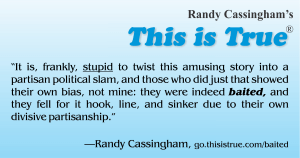 The word literally defines what the story subject was — a tavern (or “pub”) keeper — and he has been ordered by the government to be one again: a “re-publican” demand if I’ve ever heard one. And with that in the tagline, I certainly had to provide “equal time” in the slug (“The Democratic Ideal”)!

It is, frankly, stupid to twist this amusing story into a partisan political slam, and those who did just that showed their own bias, not mine: they were indeed baited, and they fell hook, line, and sinker due to their own divisive partisanship. I didn’t make it political, they did.

Sure, I also got messages from readers who “got it” and enjoyed the language twist, and you’re welcome to comment below now that you know some readers didn’t get it — at all.