I just love my job. Even though I “have to” work Sundays, I really have a gorgeous view out my window, and I sometimes see the most amazing things.

Like the two times I saw bobcats. The first time, it was clearly stalking, and suddenly it took off at incredible speed, probably after a rabbit.

(There are a lot of rabbits, too. During mating season they can be pretty hysterical, running big circles around the house — again, and again, and again, catching my eye as they go by the bank of windows to the south that let in the sun, and the view of the mountains.)

My regular view isn’t bad, either: to the south, the San Juan range, with towering (14,150 ft — 4,312 m) Mt. Sneffels (named after the volcano Snæfell in Iceland) smack in the middle. To the southwest, the Cimarrons, an offshoot of the San Juans, feature terrifically rugged peaks. Where the two meet is Ouray, tucked into a tiny valley surrounded by sheer cliffs.

And that’s what I see out my window every day.

But the wildlife is pretty nice too, as I mentioned. This afternoon, my wife said she saw an eagle out the window, but wasn’t sure if it was a Bald or a Golden.

I had missed it, but was sitting at my desk when I saw a huge bird swoop in and land atop a pinion pine tree, at most 100′ from my window. I quietly called downstairs for Kit to come up and see it. And I grabbed my camera: 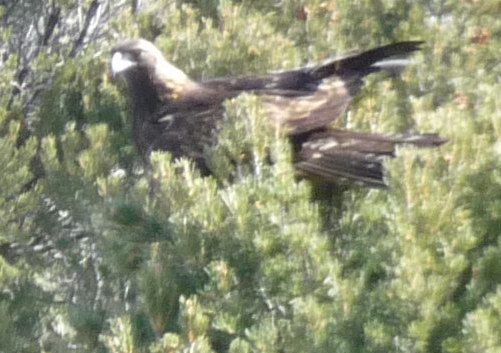 Kit got a look too, and then it took off and let us see its magnificent wingspan: 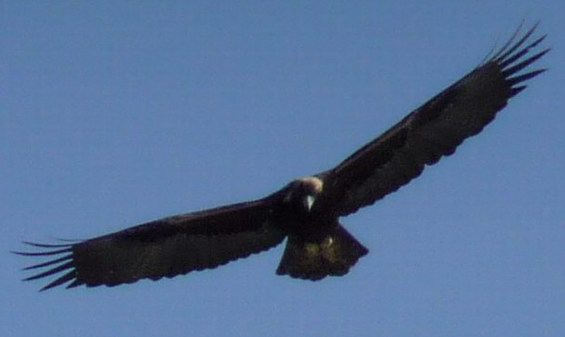 …and then it circled around to let me get a “face” shot: 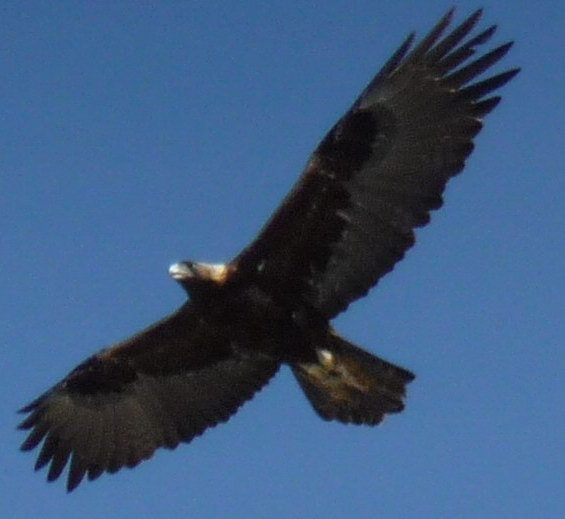 All taken with my little point-and-shoot digital camera!

We have seen Bald eagles around here, though they’re mostly closer to the river. This one’s a Golden. Yeah, it’s pretty tough to work here, but sorry: I don’t think I’ll trade with anyone.

17 Comments on “Out My Window: a Golden Eagle”