[Updated] Sometimes the photo that goes with a story is funnier than the story. Sometimes the story is pretty good all by itself. This one, from the 19 October 2008 issue, is a toss-up: I’m not sure which part is funnier. But then it happened again, and then again! We start with the first story:

Police in Middletown, Ohio, responded to a disturbance and found Michelle Allen, 32, running around the street wearing a cow suit. They advised her to go home. Instead, she impeded traffic, chased children, and urinated on a resident’s porch, so officers felt they had no choice but to arrest her. Allen, who police say smelled of alcohol, was given a month in jail for disorderly conduct. (RC/Oxford Press) …A cow suit? Funny, but she was acting more like a horse’s ass.

Wait! Don’t scroll down yet!

Put down your milk (or coffee) before scrolling to view the two photos (but go slow enough that you see one at a time. Trust me: it’s worth it. Really.

Here’s her mug shot, courtesy of the Middletown Police: 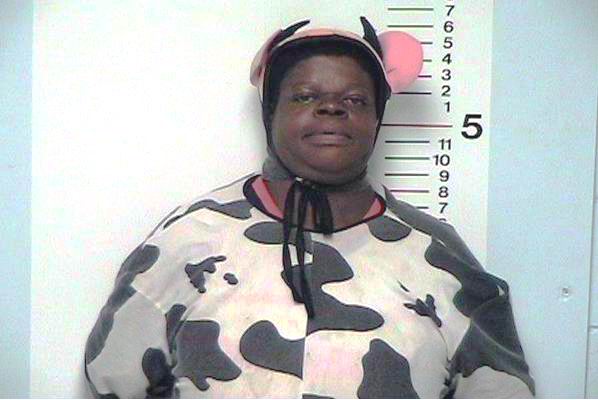 Police mug shot cameras are generally set up to get an arrestee’s face, but there was more to this case than that: 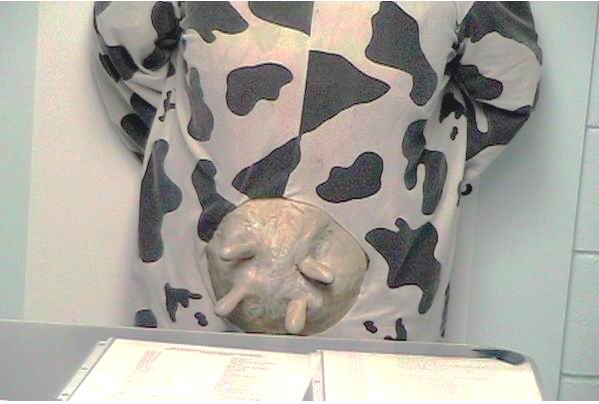 History repeated itself almost exactly 10 years later, this time in Arkansas (and with a different variation in the suit). From True’s 28 October 2018 issue:

As a police officer in Pine Bluff, Ark., was searching Ashley Curry, 27, after she allegedly shoplifted nose spray at a Walmart store, she “stuck out her stomach area and told me I could ‘suck a pink cow udder’,” the officer noted in his report. Uh, is that a threat? A bribe? Unclear, but it was apparently related to what she was wearing: a black-and-white cow costume. Yes, it had an udder, and yes, the officer took an evidence photo. Curry was taken to jail “and given a new black-and-white outfit, this one with stripes.” She was released after posting $1,520 bail. (RC/KATV Little Rock) …It was not reported whether she left wearing stripes or spots.

The trend is picking up: the next one wasn’t even four years later, though it’s about time a Florida Man got into the mix! From the 26 June 2022 issue: 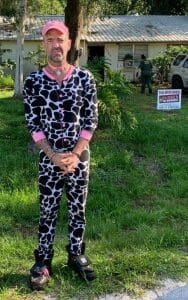 The Okeechobee County (Fla.) Sheriff’s Office raided a “drug house” with a search warrant and made ten arrests. One suspect was dressed so remarkably that a deputy stood him handcuffed on the front lawn for a full-length photo. Richard Anthony Bonnell was wearing a one-piece cow suit with a pink hat, collar, and cuffs, and was, deputies said, “udder-ly confused.” (RC/WSVN Miami) …Sure he’s confused: there is no udder.

Except for the first one, you can click the photos to see them larger.