This week’s issue had several “Zero Tolerance” stories. The stories themselves don’t matter to the following point: Whenever I run stories like these, readers write to suggest I put the principal’s/administrator’s/school board’s email address in the issue to make it easy for you to write and berate them. Please don’t; it’s not useful for you to write nasty letters to these people.

It is useful for people to write thoughtful letters to the editor of local newspapers for publication. It’s useful to go to school board meetings and protest such stupidity when it happens in your town. It’s useful for parents to watch their own kids’ schools and gather other parents to protest when such things happen to other kids at the school, so that when it happens to your kid there might be someone there to protest on your behalf, too.

Here’s a great example of what can be done, suggested by reader Stephen in Rhode Island:

I don’t often feel the need to comment, but your three items ‘Zero Tolerance’ this week have really bothered me. Does accountability, especially for publicly funded officials, no longer exist? The supposed explanations that officials use to support their own bone-headed decisions are so self-serving as to make me sick with worry about the lessons that they are imparting to the next generation.

Because most of the items that you identify are really ‘local’ in nature, the answer has to come with local grass-roots activism, where people in the community have to stand up and tell these officials where to get off. By also holding these people up to national ridicule, you are also doing an immeasurable service. Several years ago I saw an example of what can be done. There was an incident of Zero Tolerance enforcement by a local school principal (I don’t remember what the issue was but it was pretty dumb) that caused local parents to be upset. This principal refused to back down or even to discuss his decision with parents (and the local union representing school principals also chimed in support for the ZT decision).

A local city politician decided to do something about it: Citing the fact that a major factor in setting (higher) salary levels for school principals was the high level of responsibility that they had compared to ordinary teachers, he proposed that salaries for principals should be reduced because ZT policies had clearly reduced the level of responsibility that they had to deal with. The proposal actually was adopted by the local town council. Within one day, school principals in this town decided that perhaps blind adherence to ZT policies should be reviewed, and the principal involved in the original issue was meeting with parents to discuss the original decisions. So there is hope, but it needs local concerned parents and citizens to become involved.”

See, there is effective action — and an effective local politician who deserves re-election! Fantastic.

The Most Effective Tactic 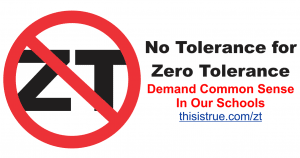 But I believe it’s going to take a societal solution to fix it. That starts with you standing up and saying you’re as mad as hell, and you’re not going to take it anymore.

Who will listen? Local politicians. Local newspapers. Your friends and neighbors. And as that outrage gathers momentum, it will necessarily spread and start to smother this stupid policy.

So yes: absolutely let your voice be heard, but do it in an effective way. Screaming at a rule-laden out-of-state school principal, even if s/he deserves it, isn’t the way to get changes made.

Threatening his or her paycheck is.

7 Comments on “What Actually Works Against ZT”