In a discussion group I frequent, one of the members posed a link, and wondered:

“Not sure if the writers here see the need for this….”

The link was to a Kickstarter pitch for the “Hemingwrite — A Distraction Free Digital Typewriter” which “combines the simplicity of a typewriter with all of the modern conveniences of living in 2014: cloud documents, e-paper display, and full-size mechanical keyboard.”

“Why?” the sales pitch asks.

“Laptops and iPads are multi-purpose devices loaded with games, social media, work email, funny cat videos, and those birthday photos you still need to edit. Like many of you, when we tried to get down to writing, we quickly found ourselves down a YouTube rabbit hole which we rationalized to ourselves as research. Sound familiar? Don’t worry, you are not alone!”

It says the device is a “distraction free” alternative to the “less productive” devices like those yucky laptop computers.

With a $45 (or more) Kickstarter “pledge” ($45 is not nearly enough to get one of these typewriters), they’d send you a “Backspace Key Sabotage Kit” — a “key remover and hammer” (yes, really!) so you can “Eliminate premature editing by eliminating your backspace key!” 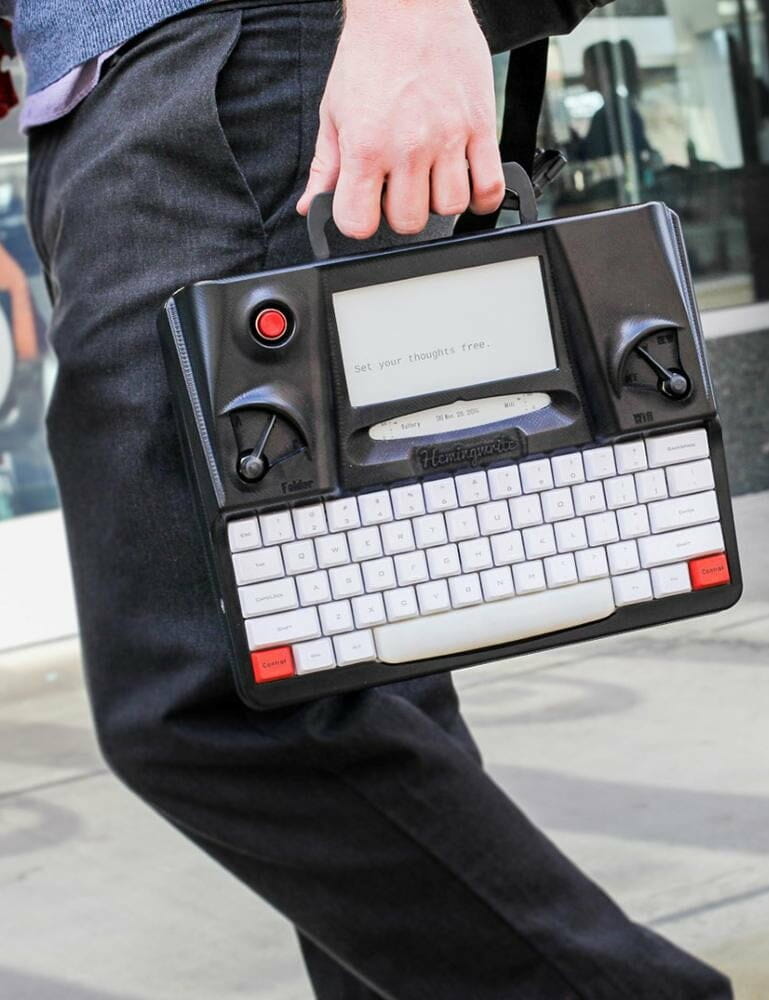 Seriously: I’m not making this up!

Yet they won’t be able to deliver even that for nearly a year!

So how much does this thing cost?

Yep: you pay extra to be a beta-tester to help their business, rather than do what you set out to do: be a writer!

But hey: it at least supports the Dvorak keyboard layout!

You Asked For It

Well, the guy on the forum asked, and I answered:

Oh, boo hoo! I can’t write because I’m SO distracted!

Writers who have something to SAY sit down and WRITE. The ones who have business sense then PUBLISH. The wanna-bes have “distraction” and “writer’s block” and on and on and on. They “need” to have a broken backspace key to keep them from “premature” edits.

All I can say is …GOOD! They can keep spinning their wheels, and those of us who actually WRITE can satisfy the audience, rather than have more garbage published.

Another member piped in: “Oh, c’mon Randy, don’t hold back. Tell us how you *really* feel.”

Clearly, she knows me well. But you want more? OK! 🙂 I posted:

I lived in LA after college. Lots of “Writers Conferences” there, and I went to a couple.

It was mind-boggling: people sitting around talking about just how COOL it would be to be a successful writer. In other words, wanna-bes, not real writers.

The second one: the same people, with the same wish — months later, and they had made no progress.

That’s all I needed: I spent the time budgeted for writers conferences on …writing!

Devices like the Hemingwrite are a trap: they make wanna-be writers feel like they’re making progress. “If only I had ___, I’d be a writer!” Fill in the blank: “A writer-specific word processor” or “XYZ writing software” or “more time” or “an idea” or whatever — they’d be a writer! And a new company pops up ever day with Yet Another Place for writers to spend money rather than do what writers actually do: write.

Another member piped up in the thread, asking, “How do you set the mood for writing?”

Several weighed in with smartphone applications that make the sounds of a coffeeshop, for those addicted to working at Starbucks (yes, really!) and such. My take on the idea:

I don’t have a “writing mood,” but there are times when I don’t want to write — tired, cranky, feeling ill, whatever.

When that happens, I’ll do something else (like edit) that gets me toward what I need to do. I eventually drop into the groove and get going. “Eventually” means a maximum of a few hours — not days, weeks, or months.

I think it’s a mistake to require something specific to do your job, such as “have to be in a cafe” or whatever (though if you have that need, then faking yourself out with a soundtrack is a good way to start breaking the habit). I’ve written in bed with my laptop (the quietest place in the house), and I’ve written while sitting in the noisy hospitality suite at conferences while keeping one ear on nearby conversations. By “practicing” in a variety of situations, you develop the mindset that you can do your job anywhere — it’s your job!

Imagine a parking valet telling his boss, “I can’t park that car — there’s classical music playing and I only like hiphop.” Or a grocery clerk telling the store manager, “I can’t check that lady out — she has noisy kids that distract me.” Or a bomb disposal expert who says to the Incident Commander, “I can’t defuse THIS bomb: it’s got an electronic timer, and I NEED to hear ticking!”

You’re a writer? Then write. It’s your job.

If music helps you focus, then by all means: play music. But I don’t want to be “dependent” on any factor — music, noises, specific places, temperatures, whatever — to get my job done. I’ve done my writing in the passenger seat while someone else is driving cross-country. On airplanes. On a sailboat in the Caribbean. In Tibet. In China. In a cybercafe in Eastern Europe. And in too many hotel rooms to count, each with different sights, sounds, smells, and other distractions. So, I’ll suggest if you want to write, try to work in different conditions, in different places, so you can get the work done no matter what.

There are sucker wanna-be writers born every minute. “I can’t write like THAT, so maybe I can write like THIS!” The truth is, if you’re a writer, then you can write. Period.

Tip: if you really find a laptop too “distracting,” then close your email program, Skype, etc., so no one can interrupt you. If that’s not good enough, or you can’t afford a computer to write on, then you can get portable “word processors” on eBay, like the Alphasmart Neo, often in near-new condition, in the range of $25 …with free shipping!

But really: if you want to be a writer, then your job is to write, five days a week (or more: I typically am at it seven days a week). “Distractions” are excuses. “Research” doesn’t count unless you put what you learn to work today, in your writing.

But “Job” Sounds So Icky!

Yep, another member complained that I used that word. Get over it! By “job” I don’t mean drudgery. You want to be a professional writer? Then by definition that’s your “job” — but if you do it right, it’s not “work,” it’s a pleasure.

I love my work. If you had told me more than twenty years ago, when I got the idea for This is True, that I’d still be doing it in 2015, I would have been thunderstruck. But it’s so freaking fun that I have no intention of stopping — as long as the readers keep funding it, and I’m healthy, I’ll keep going with it, simply because it is so fun, and rewarding, and enabling to say things I think (e.g., see previous blog entry!)

If you want to be a writer, don’t be a wanna-be. Be a writer: write!

Related Entry: There’s No Such Thing as Writer’s Block

In all, the campaign raised $342,471 (and by the way: did you notice it has a Backspace key?!) The company renamed it to “Freewrite” and later launched a new version with a list price of $599 …and (on IndieGoGo) raised yet another $241,715 …with a month still left to go as of early October 2018. Wanna-be writers continue to be total suckers.