You might remember my long-gone site, Mug Shot Museum. It was active for a mere 9 months from January 2010: Google refused to show ads on the site, and the way other such sites, which weren’t running photos with social commentary, were making money was to demand payment from the people shown …and I didn’t want to play that slimy game. That’s why it’s long gone.

Some of the commentary was so hard-hitting that readers were really upset I shut it down. Stories such as Smooth Move Megan (archived in this blog) …and the below.

Let’s start with the 2010 entry, and then I’ll have more to say below. (We used “we” at the Mug Shot Museum since Becky, my assistant at the time, wrote some of the entries. But not this one.)

Most of the pics in the entry can be enlarged with a click.

This fresh-faced lad is Michael E. Campbell, after his arrest in 2003 alleging theft in Colorado: 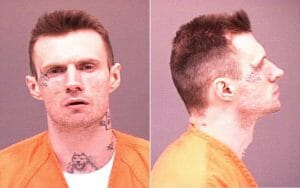 My, how things progress with time! As you’re about to see….

Just a few tattoos are just never enough. This is the same Michael E. Campbell, after an arrest for robbery in California just a year later, when he traveled to Modoc County for the Rainbow Family gathering (largest I could find):

Make sure you’re sitting down.

He has a few more tattoos, none more impressive than the polka-dot bow tie: 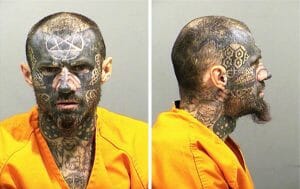 We couldn’t get any details on the nature of his 2008 arrest, but at this time he is housed in the Colorado State Penitentiary. He is expected to be released in March of 2010 (see update below).

We also have his official prison mug shot: 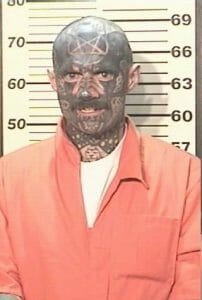 We speak for all Coloradans when we say, We can’t wait until he’s released from prison….

Update: As of October 2010, Campbell was still in prison in Colorado, his parole revoked through at least March 2011. While they were at it, the prison released this updated mug shot, which shows off his bow tie nicely: 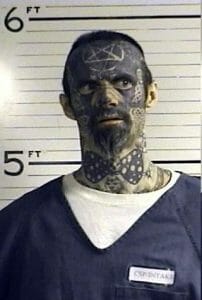 Even with the minimal commentary, MSM readers back in the day got the point, and fleshed them out in the comments. A few examples:

James in Missouri: “There’s nothing like making it easy for witnesses to identify you, is there?”

Bill in California: “I keep hearing that song that goes, ‘If you don’t know me by now…’.

I particularly appreciated that at least some women refused to be fearful:

Shar in New York: “The black tip of the nose is comical. Well, his whole face is actually!”

Of course, some made their points in amusing ways:

Bill in Australia: “‘Those three tats made me stand out, I’ll have to get some more.’” ‘Hmm, not enough — they still spotted me.’ ‘Damn, how many tats will it take to disguise my face?’”

But mostly, they were hard-hitting:

Steve in Colorado: “What a lifetime loser. I’d say it’s probably harder for him to get a job doing anything legitimate at this point with all those stupid tattoos on his face as it would be for me to get a job as CEO of Google tomorrow. What can someone who ruins themselves like that ever do legitimate for a living? He should spend the rest of his life in jail just because he’s made such a permanent, lifetime loser commitment out of his own face.

I love that readers “get it” even when my writing is fairly subtle.

Way back at that time, as a Colorado resident I created a Google News Alert for “Michael Campbell tattoo” in hopes that I’d be notified when he got out of that Colorado prison. Google failed me (or, really, probably the news media in Denver just didn’t do a story on it): He did, in fact, get out of the Colorado prison, and moved on to Missouri.

Not surprisingly, Campbell has been active in the years he’s been in Missouri.

In 2013, the Springfield News-Leader reported: “There aren’t a lot of people walking around Springfield covered in tattoos, with an inverted pentagram on their foreheads like Michael Eugene Campbell. … Campbell was back in Greene County jail on Thursday, after a woman said he assaulted her.” (emphasis added)

So clearly that wasn’t the first time he had been in jail there. Indeed later in that story: “He also has two pending felony cases in Greene County court — failing to register as a sex offender and being a sex offender within 500 feet of a park.”

His 2013 mug shot is similarly small, with a now much-more-vacant look: 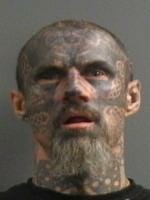 And he was in jail again later, as the News-Leader reported in 2018:

“Prosecutors say a Springfield man beat up an acquaintance last month…. Michael Eugene Campbell, 42, was charged Tuesday with third-degree assault after police say he repeatedly punched another man in the face. … Campbell’s mug shot, which shows his face covered in tattoos, has drawn national media attention in the past.”

And that led to the most clear and detailed mug shot yet, which can be clicked to enlarge: 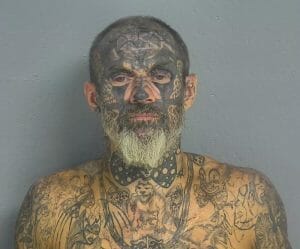 I particularly like the detail on his left shoulder of the clown …with the same bow tie. A self portrait, maybe? The bow tie is also featured on his right shoulder.

If he really wants to, Campbell can appear to be downright pleasant (if you ignore his tats), as his latest prison I.D. photo shows: 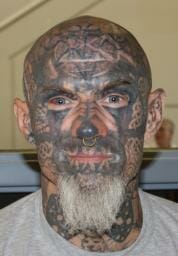 No room for more tats? Then add a nose ring!

Note that when this photo was taken, Campbell was 44 years old.

The thing to take away from the fact that he has a fairly current “prison I.D. photo” is that yes, he was in prison again. Missouri’s prisoner web site also gave some details on his biggest crimes:

Yet he was released from prison again.

Campbell was also convicted in a 2020 case of property damage, assault, and violating a protection order, and served 6 months in prison. And released yet again.

But maybe not for long: I recently did finally get a Google News Alert about Campbell, which is what spurred this post, on his most recent arrest.

Campbell, who Greene County prosecutors describe as a “white supremacist” (does he strike you as supreme?), was recently arrested yet again. According to news reports last week, Campbell climbed into bed with a sleeping woman — she was sleeping next to her boyfriend — and Campbell had her pants and underwear pulled down and was “grinding against her” when the boyfriend woke up and chased him out.

The victims told police the assailant was “an unknown white male with face tattoos,” and had escaped on a blue bicycle. Police found Campbell nearby with …a gold bicycle. But, they noted, the gold paint was still wet, having been just applied. Underneath? Blue, of course.

Campbell again faces felony charges in the case, for attempted rape. At least it’s apparently not against a 14-year-old this time.

But you have to wonder: how many times did he get away with actual rape?

His latest defense is that the woman made advances toward him, and he “told her no” since he “had a curfew and needed to leave.” Uh huh: that’s surely the reason he immediately painted his bike!

He’s being held on $100,000 bail, and as a “persistent sexual offender” he finally faces life in prison.

For his latest mug shot, Campbell goes back to his vacant “oh, crap” look: 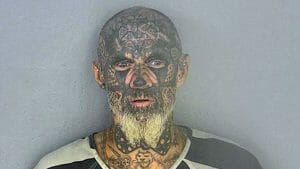 He’s now 46 years old. What a sad, vacant life he has led. He needs to stay in prison for good this time. His “transformation” is merely cosmetic.