Or, Was I Offensive to Little Girls?

There was a phrase in the previous blog entry on the 6-year-old kid, where I imagined the school staff: “Run in circles! Pull out your hair! Scream like a little girl!”

Today Nancy in Illinois complained that was “sexist language.” She writes:

I’m not about to accuse you of being a sexist, because everything of yours I’ve ever read makes plain you’re not. It seems likely you wrote as you did just because the offensive phrase you employed has been repeated so much that its inherent derision has become muffled. But in the ZT piece, did you HAVE to phrase your justified ridicule as ‘Scream like a little girl!’? It is tough enough as a girl to grow up feeling like a full and empowered member of the human race, when virtually all murder victims in TV fiction are portrayed as pretty young women. We females don’t need an added implication that we ARE the weaker sex by an (even unintended) putdown suggesting we even start out less brave and more dramatically hysterical than boys. Just ask Kit.

Of course, Kit (my wife) didn’t voice any problem with the phrase; like me, she’s not particularly enamored of political correctness. The fact is, girls do scream more than boys, especially when they’re little. When I said as much to Nancy, she replied:

Having raised both a boy and a girl, I’m not persuaded that their vocalization rates differ as significantly as claimed, but that is irrelevant. Your writing, while entertainingly intolerant of stupidity, bigotry, and meanness of spirit, consistently upholds high standards of courtesy to the innocent and well-intentioned. That is not political correctness; it’s just politeness, perhaps even noblesse oblige [italics from the original]. The fact that your track record consistently has been so sterling is what made the exception stand out. 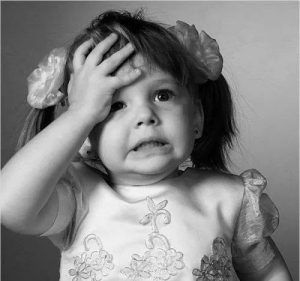 Nancy successfully avoided the knee-jerk reaction of “I’ve read you for 10 years, and thought you were wonderful, but now that I see one thing I disagree with I’ve come to understand you’re scum and I quit.” — which so, so many people have done in the past. (I appreciate that, Nancy!)

I have to admit I raised an eyebrow at the “Just ask Kit!” part, as if any woman could instantly see what a man could not …which I’m sure some would think was a sexist idea. But I passed it over to Kit again to ask specifically. Her response: “I get her point, but if your analogy had been ‘screamed like a stuck pig,’ would that have been bad or OK? It seems to me you hit a nerve.”

Certainly! So that leaves the question: is this a case of my being insensitive, or Nancy being overly sensitive, even “politically correct”? From my dismissal of hysterical adults she made an immediate connection to murder victims and French chivalry. Since she did me the favor of not knee-jerking her reaction, I’m returning the favor by asking for feedback — I’d be interested in what you think: comments are open below so we can get a discussion going.