Sometimes I Smile, Sometimes I Roll My Eyes: About the news business, that is. As a news commentary column, news is, of course, the road this publication drives on. Here’s what I mean.

True’s Honorary Unsubscribe the week of May 20 featured Bill Gold, known for being a prolific creator of movie posters. On May 28, the Los Angeles Times — you know, the daily newspaper that covers Hollywood — finally ran an obit for Gold …except that they didn’t even write it themselves: they just re-ran the one that the Washington Post wrote (and published that same day). So this one’s an eye-roller.

Not Really a Scoop

I’ll use any reliable published source to get my information on interesting people for the H.U. So since they do have to be published already somewhere, I’m not saying True is breaking any big news stories or anything. But when the newspaper of record takes a week to catch up to a guy working out of his spare bedroom, it just points to why so many people have left the subscriber ranks of local news.

(On the other hand, it’s because so many don’t bother with newspapers anymore that when I do use a major newspaper as a source for an H.U., I don’t think most readers even notice!)

The newspaper business has been suffering for decades, but we need quality news now more than ever. The “fourth estate” really is an important part of democracy: it’s why freedom of the press is enshrined in the Constitution. 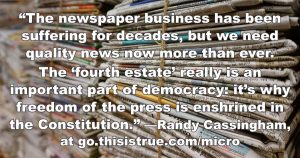 This all points to an uncomfortable bottom line for newspapers: news is a commodity — it’s why most newspapers haven’t quite figured out how to make money online. There’s a paywall at the XYZ Times keeping me from a story I want to see? Well, there’s a 99 percent chance that I’ll be able to find that news somewhere else — without having to pay $9.99 (and then fight off auto-renewals) for one article.

But a good local story? Ah, now that is something that may not be in every news publication on the planet (what’s distance in the Internet age?) — and that’s something people might actually be happy to pay for.

What We Really Need is Micropayments. I’m not going to ever pay a newspaper (or, in my case, 100 newspapers) even $5/month to access articles — not when what I really want to see is one article in a publication every 3-33 months. But I’d be fine with a penny or three for an article, even 20 or 30 of them a day to keep up with well-written (and well-edited!) news …which (hey…!) is about the cost of a newspaper.

News outlets would be able to get some serious cash in for a really good article, even a penny or few at a time, because they might draw in millions of people to read it for a few pennies. Such a way to make a reasonable transaction has been the missing function online all along, and throwing more and more ads in people’s faces just isn’t the solution: it just leads to ad-blocking wars, prompting an adversarial relationship between publications and the readers they crave.

We already see the mechanism in place. At least I do, when using my phone or tablet to read articles. On many sites I visit to read an article, the first couple of paragraphs show, then the text fades out and a button shows: [Continue Reading]. It could just as easily say [Continue Reading for 3¢] and — without having to have an account at that publication — it would move that 3¢ from my bank to theirs.

A huge online company (Google? Amazon?) could do this by skimming a small percentage as a fee, and everyone wins. Publications could set their own prices, and would get quick feedback about what works (2¢? Brings hundreds to thousands of dollars, which certainly pays for the reporter who wrote it. $1.25? Fuhgetaboutit.)

The current method — break out your credit card, and then Visa takes 30¢ plus 2.9% off the top — doesn’t cut it for micropayments.

Yep: True suffers from this too. Since 1994 I’ve been giving away much more than “a little bit” of its content in hopes that some reasonable fraction of people like it enough to pay a reasonable amount to get more of the well-written, fun, thought-provoking content that they can’t quite get anywhere else. That is what has kept it going for 24 years now (as of the end of this month). Not to mention that extra contributions from readers (you read that right: many pay more than the subscription asking price) has kept all outside ads off True’s web site for more than two years now. But if I could get a penny or two per article, I’d go for that in a heartbeat.

How long can I keep this all going? It’s all up to the readers, so we’ll see! But there’s nothing new about trying to figure all of this out.

This report from San Francisco’s KRON-TV in 1981 gave a glimpse of the news future. Note that even back then, they didn’t have any idea how it would pay:

Someone had to start the process, and it’s no surprise newspapers that served the Silicon Valley were at the forefront …and the Chronicle still runs while the Examiner is barely limping along. We march ever forward!

10 Comments on “Online News: One Step Forward, Two Steps Back”