For many, many years now, some readers have complained I must be a “heartless conservative” …while some other readers have complained I must be a “bleeding heart liberal.” And here we are again, with one side whining that I hurt their widdle biddy feewings because I didn’t give their side a pass: I let some of their party officials speak for themselves by (gasp!) quoting them.

The sad part is, it even happens with long-term Premium (paying) subscribers.

Really, would you want me to shy away from forehead-slapping obliviousy just because the obliviot was a politician? 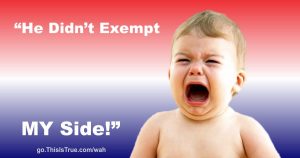 And honest, thoughtful people in the obliviot’s party laugh, even if a bit uncomfortably, just like they laugh at the other side of their political philosophy when they do something stupid. That’s honest!

Yet some refuse to be honest. They laugh at the other side and are absolutely outraged when we all laugh at their side.

Get to the Stories, Randy!

This time, it happened to be Republicans providing the fodder; in the past Democrats have had their turns (going way, way back!) So, what set readers off this time? Three stories, all told in a row, written by me (“RC” in the source block) and Alexander Cohen (“AC”) in the 4 October 2020 issue.

The funny thing is, none of these stories were planned to be in the free edition, so by the hypocritical readers’ complaints they’re now getting much wider circulation!

Please be seated and make sure your safety belt is securely fastened:

Republicans are “shaken” by President Donald Trump’s diagnosis of Covid-19 last week, especially with other prominent party members also falling to the disease after a White House event. Those include Senators Thom Tillis (N.C.), Mike Lee (Utah), and Ron Johnson (Wisc.), as well as former Gov. Chris Christie (N.J.), Trump’s campaign manager Bill Stepien, GOP Chair Ronna McDaniel, and former White House counselor Kellyanne Conway. “There was a panic before this started,” admitted Edward Rollins, co-chairman of the pro-Trump Super PAC Great America, “but now we’re sort of the stupid party.” Republican strategist Michael Steel agreed. “The president and the people around him flouted the rules,” he said. “He has been reckless, and voters dealing with the health and economic effects on them and their families won’t look on that kindly.” (RC/Washington Post) …Maybe, but elections mostly rest on the shoulders of stupid voters.

A Matter of Record

“Phil Robinson can’t manage his own finances,” claimed a political ad with a picture of Phil Robinson, a Democratic state representative from Solon, Ohio. “Can we trust him with ours?” The ad linked to a site showing that in 1999, someone sued Phil Robinson, claiming he owed money. Teensy little problem: the defendant was some other Phil Robinson, not the political candidate. Candidate Robinson and his Republican opponent — who said the first he heard of the party-run ad was in a phone call wherein someone apologized to him for it — both thought the old lawsuit would have been an inappropriate thing to attack Robinson on even if it had involved him. The ad and the website it linked to have been taken down. (AC/Cleveland Plain Dealer) …The Ohio Republican Party can’t manage its own attack ads. Can we trust them with the General Assembly? 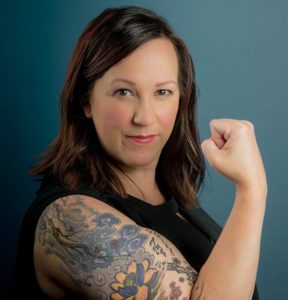 MJ Hegar is running as a Democrat, trying to unseat John Cornyn, the Republican U.S. Senator from Texas. Cornyn has to “use imagery” in attack ads against her “because they can’t use my policy positions, because they know that my policy positions aren’t radical and extremist.” The ad she references, which dubs her “hard left Hegar,” shows her tattoos. They’re “using a photo of my tattoos to make me seem ‘radical’,” she said in a Twitter post, showing her tats clearly. “That’s pretty funny to me. You think I’m ashamed of them? They cover my shrapnel wounds from when my helicopter was shot down. They’re a mark of my service to our country. I’m damn proud of them.” Hegar served in the U.S. Air Force for 10 years, including three tours in Afghanistan as a Combat Search and Rescue pilot. After flying more than 100 missions she was shot down. When another helicopter came to rescue her it was full, so she stood on the chopper’s skids during the evacuation despite her wounds. She was awarded the Distinguished Flying Cross (with Valor). (RC/KENS San Antonio) …Maybe if Cornyn had served in the military, he’d know how to do an effective attack.

Within hours, two Premium subscribers quit in protest. Tom in New Jersey, who has been a reader for over a dozen years and pre-paid into next year, said simply, “I no longer want to receive any more issues,” and didn’t reply when I asked him why. But I knew: after writing such stories for 26-1/2 years now, I expected some complaints, and that’s an important point: I published them even knowing some readers would be unhappy about it.

Kyle in Kansas, a long-time reader who is pre-paid to next summer, was more forthcoming: “I’ve always enjoyed True because it’s a break from partisan politics. It seems to me that’s no longer the case. The tag line on the first (of two!) WaPo articles basically called anybody voting for Trump stupid. That is, of course, your prerogative but I don’t want to participate.”

I didn’t say Trump voters were “stupid,” I said stupid voters “mostly” decide elections — all elections. My tagline was to point out that politicians don’t elect themselves, we elect them, and some large percentage of the time we stupidly elect the wrong person, no matter what their (or our!) party. That’s not even close to being partisan.

As Joseph de Maistre (1753–1821), a Savoyard lawyer, diplomat, writer, and philosopher, observed, Toute nation a le gouvernement qu’elle mérite. (“Every nation gets the government it deserves.”) — we, the voters, allow politicians to run rampant, violating their oaths of office and the Constitution, and we let both parties do it to us: we stupidly elect them again! I thought it was perfectly clear that’s who my comment was directed to: us!

And there is nothing at all new or one-sided about this: I’ve certainly called out Democrats the same way.

Baltimore, Md., Mayor Catherine E. Pugh, 69, enjoyed a long career in politics before resigning earlier this year in a scandal. As a state senator, Pugh pushed organizations to buy large quantities of her self-published books for children — allegedly in exchange for state or city contracts, or other favors, and used the resulting money to fund her campaigns and buy a house. A Democrat, Pugh is now facing federal charges of fraud, conspiracy, tax evasion, and more. Prosecutors say she sold around 100,000 books in one transaction alone, but only around 63,000 copies of her books have ever been printed; after selling them, she would simply sell them again and again, since the buyers didn’t actually want them. Her longtime aide has already pleaded guilty to similar charges. Pugh ran her mayoral campaign on the theme that she had “more integrity” than her main opponent, Sheila Dixon. (RC/Washington Post) …Well that’s an awfully low bar.

For the 99 percent of readers who don’t know, the Sheila Dixon who set the “awfully low bar” is a former mayor of Baltimore (and, yes, also a Democrat). She was indicted in 2009 on 12 felony and misdemeanor counts, including perjury, theft, and misconduct. The theft: she allegedly took gift cards intended for poor Baltimoreans for herself. In a 2010 plea bargain, she was convicted of one misdemeanor count of embezzlement over the gift cards, and (as part of the bargain) was forced to not only resign as mayor, but agreed not to run for any office in Maryland while on probation. Yet she was allowed to keep her $83,000/year pension, served no prison time, and will have no criminal record if she stayed straight during her probation, which apparently she did; her probation ended in 2014, and she ran for mayor again in 2016, but lost in the primary to Pugh.

As for Pugh, earlier this year she was sentenced to three years in prison, three years of probation, and the forfeiture of around $670,000, including her home and the remaining balance of her reelection campaign account. U.S. District Judge Deborah K. Chasanow also ordered Pugh to pay $412,000 in restitution, and ordered that all copies of Pugh’s “Healthy Holly” books in government custody to be destroyed. Pugh finally reported to federal prison on June 26, 2020.

How many Democrats whined when I ran that story last December? Not one. Though as noted, some have complained about stories in the past.

Will You Step Up?

Of course the point (as always!) is that True doesn’t target politicians (or cops, or military members, or Uber drivers, or…). The stories are about the actions of anyone who does things stupid enough to get into the news — including politicians regardless of party. That’s what “nonpartisan” means: True doesn’t take sides.

So if you honestly think I’m not going to hold up some examples malfeasance or stupidity because the miscreant happens to be a Republican — or a Democrat, Libertarian, Green, or Independent — you’re not thinking very hard.

I truly don’t care if you’re Republican, Democrat, or none of the above: I care if you think and, when it comes to politics, I care that you demand that the people you elect hold themselves up to what they say they stand for, like integrity, hard work, and improving our broken systems — things that have been damaged by their colleagues who have succumbed to the trappings of power and ill-gotten wealth, which is almost all of them.

That’s apparently not the sort of readers who quit this week, who appear to be “party over country.” So if you’re not already a Premium This is True reader — subscription fees cover nearly 90 percent of True’s budget — will you consider replacing those faithless former readers with your upgrade? You’ll not only be sent all of the stories every week, but Premium comes sooner, has the full text of the Honorary Unsubscribe, early (or exclusive) access to specials, book discounts, and more.

I think of “This is True” as more than a brand: it’s a promise that I hope you will help to support. Thank you!

29 Comments on “Political Hypocrites and Other Silliness”