This is True has tackled the issue of people choosing to be offended on a number of occasions (such as in the tagline of this story).

Most times, of course, the offended are complaining about a story, not embracing it. On most of those occasions, when someone is writing to complain how they’ve chosen to be offended by something I said (or, often, didn’t say!), I’ll often get an amusing response from other readers — the ones who don’t unsubscribe in protest.

The Ones Who Get It

They’ll “complain” that I haven’t offended them yet. I need to try harder, or slaughter more sacred cows, or whatever. And they’re often serious. (Others are more tongue in cheek, saying they have a Premium subscription and a free one, so that they can indignantly unsubscribe from the free edition in protest — but still be able to read the Premium edition.)

Just before going to bed Saturday night after dinner out with friends, I checked the This is True page on Facebook and noticed that it had nearly 6,000 “Likes” (or “fans” as they were called in the old days). So as I went to bed I was wondering what to do in the morning to celebrate the 6,000th fan.

By morning it was well over 6,000, and I had my response ready. I whipped up a graphic to post what I said was a “very heartfelt message”: 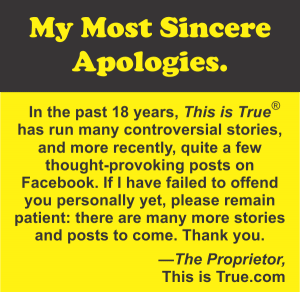 For the visually or graphically impaired, the bold graphic is titled “My Most Sincere Apologies” and says, “In the past 18 years, This is True® has run many controversial stories, and more recently, quite a few thought-provoking posts on Facebook. If I have failed to offend you personally yet, please remain patient: there are many more stories and posts to come. Thank you.” It’s signed “The Proprietor, ThisIsTrue.com”.

I knew a lot of people would get a chuckle, but I was astounded by the response. There were 100 “Likes” in the first 15 minutes, and nearly 700 in the first 24 hours (that’s definitely a lot; most don’t bother to click “Like” even if they do like it).

What I did expect was some very thoughtful comments, and I wasn’t at all disappointed. I wanted to share a few of those comments with you — from the non-offended and the offended alike.

“I’ve been reading This is True for so many years now..it just seems like part of the lexicon of my life…and writing this comment I just realized why This is True doesn’t go by its acronym…ever! 🙂 Randy if you are ever in Eugene, OR, look me up..I would like to buy you a beer.” —Peri, Oregon

At the risk of offending, Peri, I’d rather you upgraded to Premium than buy me a beer. Less fattening for me, and helps to ensure True can continue! Premium is something like 85% of True’s income, and thus vital to its survival. (Peri later replied, “You are right…and I still want to buy you a beer. Looking forward to 2 years of Premium content!”)

“Unlike most when they complain I think that when I’m offended by something you write I will finally get a paid subscription, instead of unsubscribing in a pouty tiff!” —Mark, California

(I told Mark he’s “WAY too ugly and stupid to follow up on that threat!” but he replied, “You’re going to have to work a lot harder to offend me. But thanks for trying.” Damn! 🙂 )

“Randy, lotsa luck. I’m really not so easily offended, and while I have raised an eyebrow on an occasional post or story, being actually offended is too much effort. Unlike many in this point of history, I don’t see power in being offended or angry. (and that’s, frankly, why I think these people choose to be offended and angry). Anyway, keep tryin’, and I’ll keep readin’. When you accomplish your goal, I’ll be the first to let you know. Deal?” —Teresa, Louisiana

This and other comments below are examples of thinking first, and reacting later (if at all).

First Lady Eleanor Roosevelt once said, “No one can make you feel inferior without your permission.” My version of that: “No one can offend you without your permission.” Surely it’s better to “learn something important about myself” and understand that “If my opinions cannot withstand a bit of offense, they are not worth holding” than to whine and mope and …well… act like an obliviot when someone runs up against your own biases.

It’s really cool so many said they doubted they could be offended. I’m still striving for that! I’m still at where many others are: they definitely can be offended, but rather than blame the messenger, they look inward to see what’s going on, and address their own insecurities or beliefs first. If they still disagree, fine: they know there will be another story they will like.

I’ve said I’m not a pessimist, but rather “a frustrated optimist.” And that is why I’m still an optimist: because there are people out there who can think, and grow, and make the world a better place, rather than whiny jerks who not only demand to be offended, but demand to have someone else to blame when they have chosen offense.

No one can offend you without your permission. When you’re offended, look within to figure out why. There’s growth there.

26 Comments on “Sorry You Weren’t Offended”