“Florida Man” really is a thing, and apparently so is “Florida Vehicle” (which, to be fair, is just a vehicle with a Florida Man at the wheel). Such stories led the past two issues (and ended up as Story of the Week both times), so let’s take a closer look. 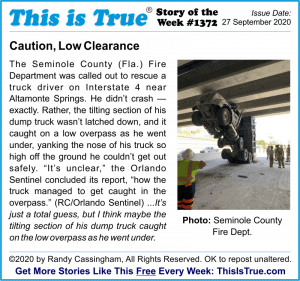 Last week it was an accident, more or less. (Click to see larger.)

More because it was accidental, but less because shouldn’t a professional truck driver 1) know how to secure his vehicle properly, and 2) grasp that the “Bridge Clearance” sign applies to him? Well, apparently not in this case.

But last week’s example pales in comparison to this week’s. Wait’ll you get a full understanding of Marco Mazzetta’s mentality. Let’s start with the story, from True’s 4 October 2020 issue: 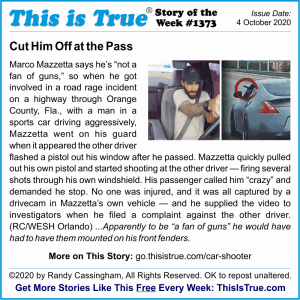 He probably was minding his own business while tooling down the FL-417 highway outside Orlando, when a Nissan 370Z zoomed up and tailgated him.

So the Nissan “started it” — but Mazzetta escalated: he says he “brake checked” the guy, which caused him to bump into Mazzetta’s truck’s rear bumper.

That, of course, set Mr. Nissan off, and he zoomed around Mazzetta, who had a friend in the passenger seat. When the Nissan was in front of him, Mazzetta says, the other driver flashed a gun out his window (all the photos on this page are captured from his dashcam, which helpfully shows both the view ahead and inside Mazzetta’s truck cab and out through the back window): 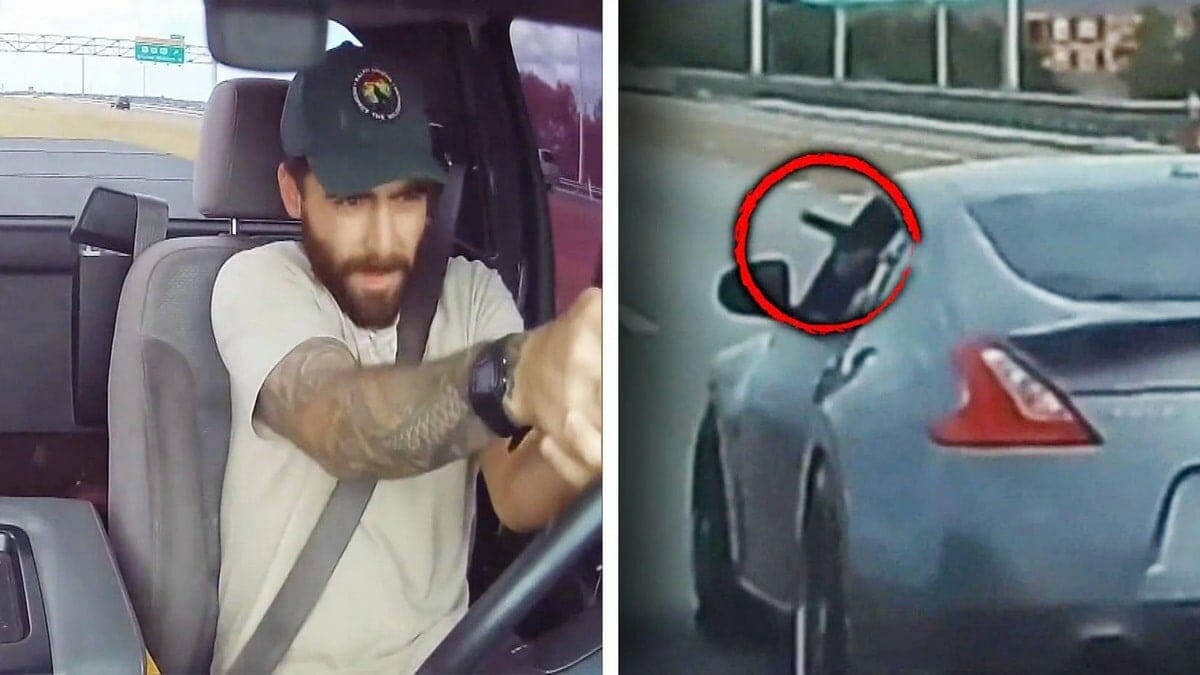 Well, it might be a gun, and probably is; let’s just assume it is and break this down:

Every one of those points is an element of incredible obliviocy.

Look closely at this screengrab taken as Mazzetta is pulling his gun: 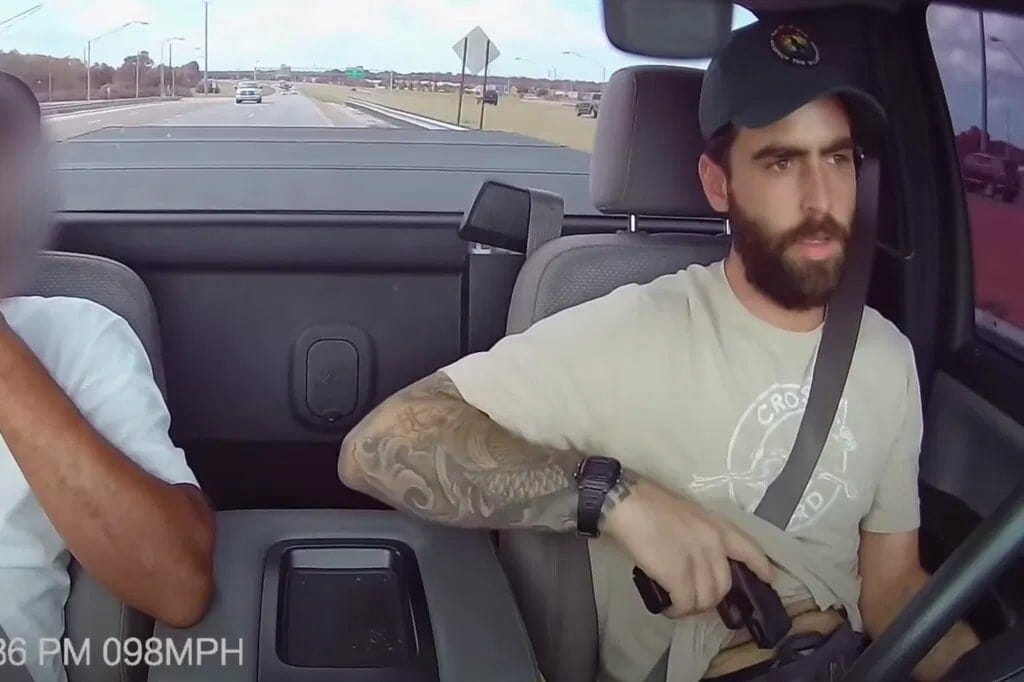 According to his own drivecam, which apparently is GPS-equipped, he’s speeding along at 98 mph to catch up to or keep up with the Nissan! And, as he lines up to take the shots: 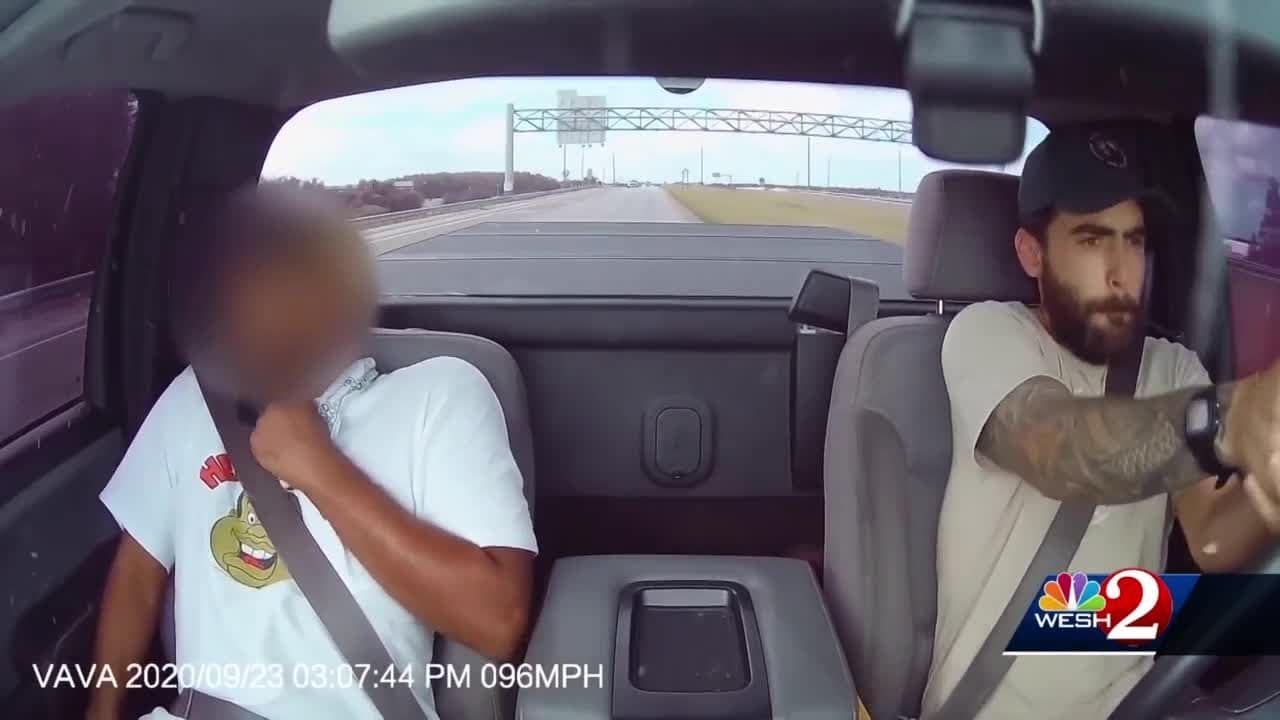 I also like how this makes it clear that Mazzetta isn’t leaning out the window to shoot, he’s rather shooting through his own windshield, which resulted in him and his passenger getting sprayed with pieces of glass. A later view toward the front shows damage to the glass: see below for the news report from WESH Orlando.

Chasing after someone to shoot at them doesn’t sound much like self-defense to me. If he was afraid for his life because of the brandished firearm (even if it was pointed at him), all he had to do was take his foot off the gas, and take the next turn after the other driver passes it. That sure sounds a lot safer than the path he decided on.

And remember, all of this is based on his side of the story! As far as I’ve heard, the Nissan driver hasn’t been identified.

I did check to see if, in the nearly two weeks since this happened, there are any updates — such as Mazzetta being arrested for wanton endangerment. So far, nothing, but I wouldn’t be surprised to hear that charges were filed against him.

Did I say “obliviot” yet? Because it definitely fits. Statistics show that civilians using guns to defend themselves are much more likely to not injure an innocent bystander, such as the previous shooting breakdown I did in July — a police shooting: Peak Stress. In this case, the civilian with the gun sure looks like the “crazy” party.

18 Comments on “Florida Man: On Wheels”