A tagline on a story this week was designed to provoke. I even talked about the tagline and said it was to provoke. Yet it still brought complaints and “disagreement” — even though it’s impossible to agree or disagree with my thoughts, since the tag didn’t reveal my thoughts.

But I Still Made a Huge Mistake!

The mistake was, I included the discussion in the free edition, but forgot to leave the story in when I whittled the issue down to four stories, so no one knew what I was talking about!

D’oh! That’s one of the hazards of putting the issue together on deadline after a tiring 12-hour day. But at least I have the chance to “fix it” by posting this!

So it’s all gathered together here to clear up the confusion created when I explained something that no one could see, and to give a place for readers to comment.

Employees at the Walmart store in Glendale, Ariz., saw a man allegedly pocket a pack of cigarettes. When confronted, the man allegedly walked out, but then came back and threw his keys at an employee. He then, witnesses say, grabbed a bottle of booze from a shelf and hurled it through the front window, smashing it. Then it gets weird: the man allegedly took 12 employees hostage in the store’s break room, telling them to lock the door and sit on the floor. When told the door didn’t have a lock, he started pacing back and forth. Police arrived and learned the weapon the man was using to hold the hostages was a fire extinguisher. When the suspect raised it in a “threatening manner,” an officer shot him with a Taser. Ryan Herman, 23, was charged with unlawful imprisonment, assault, shoplifting, and aggravated assault on a police officer. (RC/Arizona Republic) …A dozen employees held captive with a mere fire extinguisher? That’s what happens when Walmart doesn’t pay employees enough to afford the guns Walmart sells.

Last week when talking at a gathering of friends about the industrialization of the U.S., someone commented that part of Henry Ford’s genius was that he paid his assembly line workers enough that they could afford to buy the cars they were building. Someone else pointed out that according to studies*, Walmart employees are paid so little that a significant portion of them are on medicaid, welfare and/or food stamps, which amounts to a taxpayer “subsidy” of Walmart’s payroll.

The two ideas stewed for a few days, and came together as I wrote the rather provocative tag for the “Note the Charges” story above. Just a little insight into my writing process….

That Ain’t No Viewpoint

Several Premium-edition subscribers read that story and the above paragraph and took issue with my “viewpoint” on the subject, decried that the tag “suggests” that a higher level of violence was the “solution” (i.e., that “guns solve everything”), or that I “buy into” the “union propaganda.”

I pointed them back to the above paragraph that even states that the tagline was meant to be provocative. How does a commentator get readers to laugh, or to think? By pushing readers a little bit off kilter, to look at things in an unexpected way.

Nor do I “endorse” the “one such” “study” about Walmart and welfare; the link is merely for your convenience if you don’t know what this refers to. It’s all about what other people said, and I melded it together into something new to provoke a laugh (and/or thought!) Just another example of the value of thinking first, and reacting second (if at all)!

But the “best” comment came from Dave in Florida, who thought the tagline should have been, “This is what happens when you are taught from the cradle that you shouldn’t protect yourself, that you should wait for your government to protect you.” See, that’s having your thought provoked after being pushed a little bit off kilter!

Just Sit There and Take It 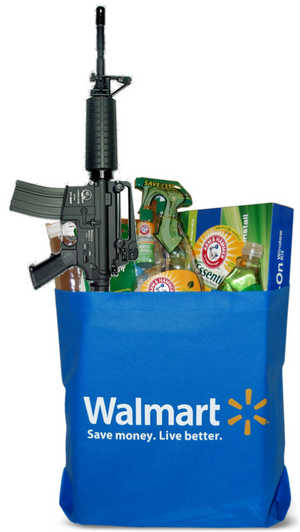 Dave Wasn’t the Only Premium subscriber who was pushed to think about it and came up with a great response. Karl in New Jersey was another: “A dozen employees held captive with a mere fire extinguisher? That’s what happens when kids grow up under Zero Tolerance policies. They take fake weapons too seriously.”

Just so: both point at the lack of self-sufficiency that’s being ingrained in our children — to their (and society’s) very great peril.

Oh, and the graphic to the right? That’s meant to provoke too. (Yes, Walmart really does sell guns, if you’ve never noticed.)

So think instead of reacting: what does it say about society that a dozen people could be held hostage by one guy …armed with a fire extinguisher?

Because that’s the bottom line here.

And if it takes shocking people a little to get them to think, then so be it.

But it’s a little sad that they react rather than think even when you tell them that you’re doing it on purpose.